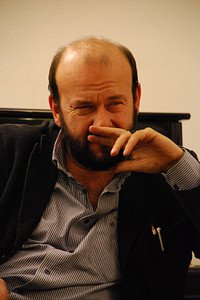 Davide Rondoni (Forlì 1964) published many volumes of poetry, including “Apocalisse amore” (Mondadori 2008), “Avrebbe amato chiunque (Guanda, 2003), “Compianto, vita” (Marietti 2001) and “Il bar del tempo” (Guanda 2001), Rimbambimenti, (Raffaelli 2010), Si tira avanti solo con lo schianto, (Whyfly 2013) with whom he won some of the major poetry awards. His works are translated in various countries in volume and magazine.
He collaborates on poetry programs in television (Rai and Tv2000) and in newspapers as a columnist.
He founded and directs the Center of Contemporary Poetry of the University of Bologna and the magazine clanDestino. His recent volumes of essays are “Nell’arte vivendo” prose e versi su arte e artisti (Marietti 2012), “Contro la letteratura” (Saggiatore 2011)sull’insegnamento a scuola “Il fuoco della poesia” (Rizzoli 2008), “Non una vita soltanto” (Marietti 2001).
He directs book series of poetry for Marietti, cartaCanta and for Subway Ebook Editions.
He is a playwright and a translator from Baudelaire, Rimbaud, Peguy and others. He participated in international festivals of poetry in many countries. In prose he published Il bacio di Siviglia (2016) E se brucia anche il cielo ( Frassineoli 2015) Gesù, un racconto sempre nuovo, (Piemme 2013) , “I santi scemi” (Guaraldi 2003) e “Hermann” (Rizzoli 2010). He teaches poetry in many universities.
In the musical and theatrical field, he is currently partnering with Teatro Stabile in Brescia, Pergola in Florence, the Musical Auditorium in Rome and Andrea Sparagna’s Folk Music Orchestra.
His texts have been read and staged by some of the best Italian actors.
He collaborated for some projects focussing on a meeting between music and poetry, among which “The Musician’s Body” with Danilo Rossi, the first viola at La Scala in Milano, some musical stages by Christian Carrara (Blood Destination.) and by other Italian composers and musicians, such as Lucio Dalla, Marco Morgan Castoldi for Pop and masters of the contemporary musical scene, Pippo Molino and Roberto Andreoni, along with new talents in the same field.
He has recorded (discs of) music and poetry.
He is currently partnering for an exhibition project aiming at an immersive experience of Antonio Vivaldi in Venice.
He chairs the Zucchelli Foundation in Bologne for the promotion of young artists at the Conservatory and Academy of Fine Arts.

PARTECIPAZIONI
2019 - YOUR FACE, YOUR WORD. POEMS AND LITERATURE AS ENCOUNTER AND LOVE