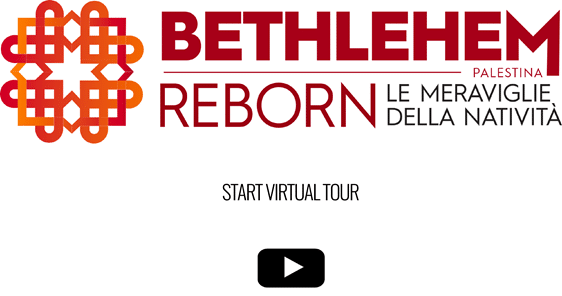 At the end of unprecedented renovations that lasted almost ten years, the Basilica of the Nativity in Bethlehem has been restored to its original beauty. A symbol of humanity has been given back to the faithful all over the world, modern pilgrims who follow in the footsteps of women and men who over the centuries have venerated the birthplace of Jesus.

Through the discoveries of new archaeological excavations and complex restoration work, this is the story of renewed devotion – from the time of the first Christians who venerated a simple cave to the age of the Byzantine emperors who built the most magnificent basilicas of antiquity, later fortified and lavishly decorated by the knights who founded the Crusader Kingdom of Jerusalem. The exhibition extends to the present day and shows the long period of neglect and deterioration that had seriously jeopardized the ancient structure, until the moment when, thanks to an historic agreement, the Palestinian National Authority committed considerable economic and professional resources to manage a restoration project amid very sensitive social, political, and diplomatic conditions, harmonizing the requests of the three religious communities.

The new exhibition uses the nearly completed restoration project as a thread that stitches together an even greater history: that of the oldest monument in Christendom.

For the first time in history we can reconstruct, through restoration work and archaeological excavations, a broader and deeper story that embraces the entire space of the basilica, from the system of grottos to the roof, and develops chronologically from the oldest periods up to the present day. It is a story that goes beyond the history of politics and art to reveal, through the voices and accounts of pilgrims, the story of religious pilgrimage with its various rituals, prayers, and journeys of the faithful who have visited the basilica throughout the centuries. This rich history accompanies visitors today, helping them to rediscover themselves as modern pilgrims.

A parallel tour will be developed – in physical and virtual versions (to meet current health and safety needs) – on a dedicated platform where visitors will find much unpublished content. The exhibition, deeply desired and supported by the Embassy of the State of Palestine to the Holy See in collaboration with the Meeting for Friendship among Peoples Foundation, aims to promote and make known to the world the restored face of a country, a place given back to the world and to the Christian communities of Bethlehem and Palestine. It is an experience of knowledge and spirituality destined to change the concept of renovation and peace, a river of emotions similar to that river of pilgrims from all over the world who every day bow in reverence before all this beauty to go through the small Door of Humility.