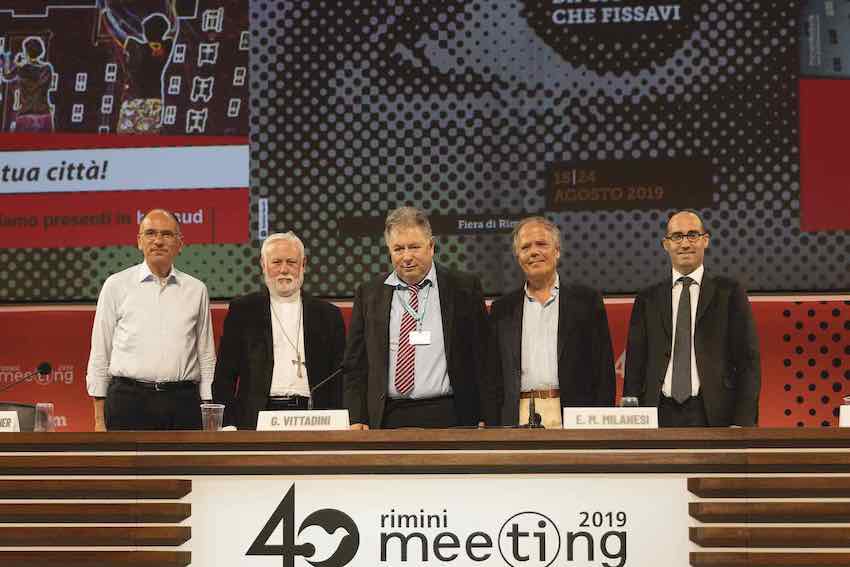 Forty years ago the first European parliament by direct universal suffrage was held. Forty years ago there was the turning point that brought the citizens of Europe to elect the members of one of the institutions of Europe itself. It was with the memory of this important moment for the European people that the encounter “ Rights and Duties. Europe: 1979-2019”, began. It was present the Secretary for Foreign Affair, Political Affair and Justice of the Republic of Saint Marino Nicola Renzi, he underlined the importance of having strong relationship with the EU even for a small State as Saint Marino. Enzo Moavero Milanesi, Minister for Foreign Affair and International Cooperation, answering, before the encounter, to the tough questions of the journalist on the crisis of the Italian government, stated the necessity of << waiting for the evolution of the actual situation, rather than making assumptions>>.

The main theme of the encounter was Europe. A Europe where the importance of the citizen is still too little, said Giorgio Vittadini, president of the Subsidiary Foundation: it’s the Europe of the States. A Europe where rights and duties are not balanced. << We are here to ponder, in general terms, on this two themes: rights and duties>> claimed VIttadini << the right to have a parliament that represents people, that makes them feel near to the politician. And then the duties. A duty that ensure that what is decided is also applied>>.

Monsignor Paul Richard Gallagher, Holy See Secretary for Relations with State, underlined the importance of rethinking and re-establishing the relationship between rights and duties, in which the duty of solidarity << characterized by concrete facts and acts that make us near to each other, necessary precondition for other engagement>> plays a central role. This is what, in Gallagher’s opinion, debilitated the heart of the glorious European project and caused the continuous weakening of the necessary sense of duties and the progressive subjectivation of the rights.

Enrico Letta, president of the Jacques Delors institute, couldn’t avoid to emphasise the breaking inside the European Union. The radical and fast changes of today whole word, in Letta’s opinion, should make us think that:<< we couldn’t revive Europe’s future just beginning from the reason that drove us seventy years ago>>. This unexpected fast changes put us in front of a reality where Europe is risking to be crushed by the two powers that are becoming leader in the world: America and China. It’s in this scenario that cooperation and cohesion is really important << If anyone were by himself>> declare Letta << we all would be so little that we wouldn’t be able to converse with China and America. They listen to us because we are united. Together we possess a unique leadership and dimension>>. It’s fundamental to raise our voice and make our way in particular in that fields where we have always had a central role, such as environment and data protection. Letta underlined that in the European system, differently from China and America, the individual is always in the centre: <<The individual comes before the profit and before the intrusion of the state , through personal data, for his gain>>.

Moavero brought to the attention of the listener the low participation to the European Union’s election:<< This element bring in evidence the paradigm of rights and duties. Because if there is the right to elect a legislative assembly there is also the duty to vote for this. On this duty European citizen are careless>>. The important turn that brought the members of the parliament to be directly elected by the citizens of the EU was, in Moavero’s opinion, not completely understand as <<an occasion to exercise an indirect but free control on the European reality>>. The European Union isn’t too frequently felt as a big part of our being. Facing the big challenges of today, Europe can be “a winner” only: << strengthening our union, finding again the animus operandi, the ability of working together that it was lost. Finding again this ability to sit together around the table with the objective to reach compromises and unions, not division>>.