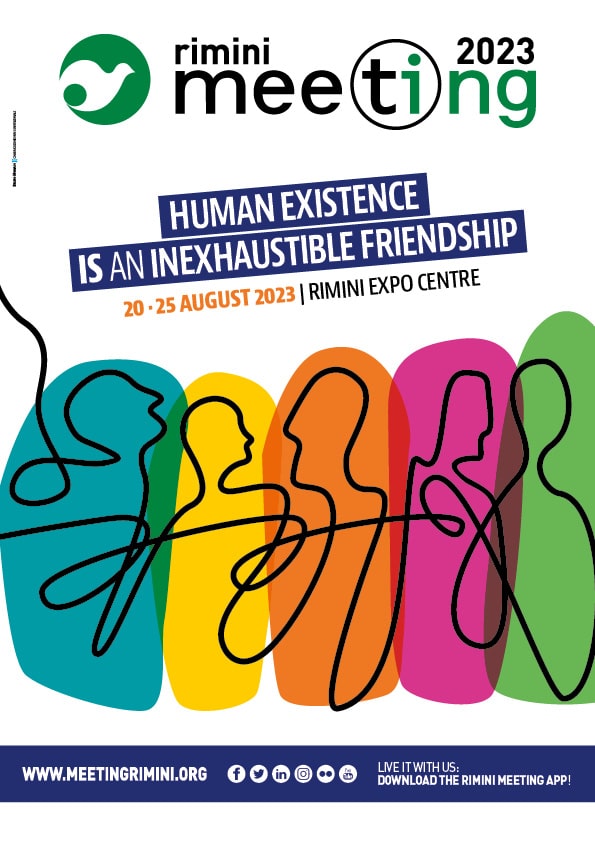 Human Existence is an Inexhaustible Friendship

The title of the 2023 Meeting is an invitation to discover or rediscover friendship in its profound meaning, in its generative power, in its origins and in its prospects for the existence of every human being and for the creation of a new sociality.

Friendship has always been at the centre of the human heart’s desire; it is a gift that no one can claim. The greater the awareness of not being able to respond personally to the fundamental demands of happiness, truth, justice and love, the more powerful the desire for a relationship of genuine friendship will be. In the experience of incapacity and loneliness, human beings in fact feel the need for an openness that drives them to a relationship with others, in search of self-realisation.

In this regard, Fr. Luigi Giussani writes in The Religious Sense, “If I look at a man, a woman, a friend, a passerby, without the echo of that question resounding within me, without that thirsting for destiny which constitutes him or her, then our relationship would not be human much less loving at any level whatsoever. It would not, in fact, respect the dignity of the other, be suitable to the human dimension of the other. My structure as plea is not generated by my own will; it is given to me. Therefore, before solitude there is companionship, which embraces my solitude. Because of this, solitude is no longer true solitude, but a crying out to that hidden companionship.”

Therefore, it is not a privilege but a gift, which leads to sharing, which seeks to meet the other in his or her deepest needs and expectations, which generates relationships and places where the single “I” feels connected to the “I” of others, allowing this way a “we” to emerge firmly anchored in the consciousness of the individual.

It is precisely for this reason that the spread of this friendship throughout history, its expansion–in concentric circles, as we might say, in societies of different eras up to the present day–has created and continues to create cultural and social works, initiatives, movements oriented towards the common good.

The Meeting itself was born from a friendship and still continues to take a bet on the relationship with the other, knowing that this relationship is an invitation to dialogue, to share knowledge and life experiences, in a dynamic of reciprocity that can become a friendship that lasts over time, from friendship between individuals to friendship between peoples. In a context like the present one, where war and violence rage, dialogue is indeed the only possible way for mankind to recognise again that the other is good and to long for and work for peace.

Every true friendship is a prophecy for peace, it is a promise that it is possible to live together without differences and diversities becoming an objection or an obstacle: instead, diversities nourish and sustain the very common search for what is good and true. And so the bond between people is strengthened and made ever more creative, overcoming enmities and indifferences with a reciprocity that regenerates itself ceaselessly, moment after moment, without end.