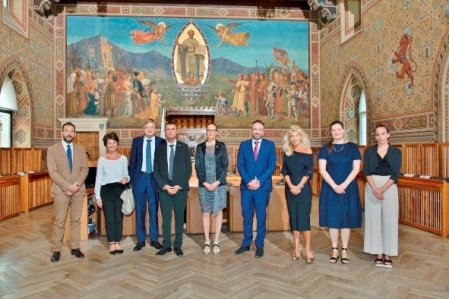 We could define “historic” this morning’s meeting in San Marino, where the captain regents, Alessandro Mancini and Grazia Zafferani, received for the first time in their headquarters, the Government Building, the meeting delegation formed by the president Bernhard Scholz, the director Emmanuele Forlani and the head of public relations Nicoletta Rastelli. In fact, despite the strong and long-running cooperation between the Titan and the Foundation, the annual meet and great generally used to  take place during the days of the event at the Fiera. The change in the routine has been imposed by the anti-covid19 provisions and by the “blended” mode that will characterize the Meeting 2020 Special Edition.

“We are more than certain that despite the Meeting will be held differently this year, it will be able to confirm the attention and the interest that it has always aroused because of the issues it covers and the authority of the people called to discuss and bring their testimony.  We are convinced that, in this particular moment, it is even stronger the need of a “high” contribution to reflection, of stimuli and insights useful to face this difficult and complex present with more awareness and a broader perspective”  emphasized Mancini and Zafferani. "The working relationship between San Marino and the Foundation is based precisely on the attention constantly aimed at the person, on the commitment to promote occasions of confrontation and dialogue. A dialogue that – we believe – is much more richer and more profitable the more it takes place between  different voices and positions, united by the belief that there is no other viable path except that of dialogue and collaboration to face the demanding challenges that today humanity is called to face" the heads of state also had the opportunity to underline.

The meeting delegation was introduced by the Secretary of State for Foreign Affairs Luca Beccari. "We are sure that the next Special Edition of the Meeting will be an extraordinary opportunity to share, even more, the big questions of meaning, the crucial questions about human existence and the sense of history and will know how to deal with authority and its great culture grown over the years, the future of man, the great protagonist of all its editions, the future of politics, of Europe, developing many themes that today require meaning and sharing" said Minister Beccari who subsequently recalled" the historical friendship between the Meeting and San Marino” and he started talking about the recent change at the head of the Foundation, with the passage of the baton from Emilia Guarnieri to Bernhard Scholz, the current president. «In the last few months, we witnessed a sequence of attitude of wonder and astonishment towards many human resources who, with dedication, abnegation and a lot of heart, gave evidence of altruism, generosity and value of human life. I want to thank Emilia Guarnieri also for this prophetic perspective. I wish her successor, Bernhard Scholz, and all of you the stabilization of a successful Meeting».

The president Bernhard Scholz thanked the Republic of San Marino for its collaboration and its support towards Meeting. «With its presence, San Marino has always admitted Meeting’s ideal commitment for friendship amongst people and contributed to make significant meetings to analyze topics related to international cooperation». «With its tradition – that was able to combine freedom and independence with collaboration and communication» Scholz added «the Republic of San Marino represents an important political experience in the middle of increasing geopolitical tensions».