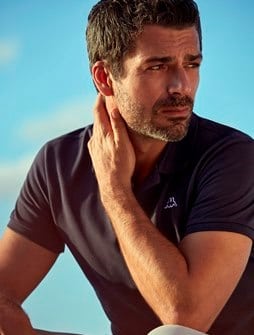 Born in Turin, he obtained a degree in Economics in 2004.

In 2005 he appears as an actor for the first time in the TV show  Carabinieri, where he plays the role of Marco Tosi, from the fourth to the sixth season. In 2006 he debuts in the big screen with the movie A casa nostra, directed by Francesca Comencini. In 2007 he comes back to the movie theaters with Saturno contro, directed by Ferzan Ozpetek and Lezioni di cioccolato, directed by Claudio Cupellini, with Violante Placido. On Rai Uno, he and Vittoria Puccini are the main characters of the miniseries  La baronessa di Carini, directed by Umberto Marino.

In 2008 he plays the leading role in Solo un padre by Luca Lucini, with Diane Fleri, Fabio Troiano and Claudia Pandolfi and in Diverso da chi? in 2009, directed by Umberto Carteni, with Filippo Nigro and Claudia Gerini. For the latter work, he obtained his first nomination for the David di Donatello as best actor in a leading role.

In the same year, he acts in Il grande sogno by Michele Placido, with Jasmine Trinca and Riccardo Scamarcio, where he plays the role of the leader of a student movement of the ’68 and in Oggi sposi, comedy written by Fausto Brizzi, Marco Martani and Fabio Bonifacci and directed by Luca Lucini. In 2010, he acts in three more movies: La donna della mia vita, directed for the second time by Luca Lucini, C’è chi dice no, by Giambattista Avellino, where he acts together with his wife Myriam Catania, and Eat pray love, directed by Ryan Murphy, with Julia Roberts.

In 2010 he also makes his debut in the theatre with the show Shakespeare in Love, directed by Nicola Scorza. Moreover, he is given the role of Tiberio Mitri in the miniseries Il campione e la miss, directed by Angelo Longoni. In 2011 he gives voice to Fred DeLepris in the movie Hop by Tim Hill and in the same year he plays the role of Mattia in Lezioni di Cioccolato 2 for the second time and acts in the French movie Le Guetteur, by Michele Placido, together with Daniel Auteuil. In 2012 he takes part in the screen adaptation of the book with the same name by Alessandro D’Avenia, Bianca come il latte, rossa come il sangue.

Later, he is directed by Marco Risi in the movie Cha Cha Cha, by Luca Miniero in Un boss in salotto alongside Paola Cortellesi and Rocco Papaleo and by  Alessio Maria Federici in Fratelli Unici in 2014. In the following years, he keeps gathering achievements with Noi e la Giulia directed by Edoardo Leo, Poli Opposti and Al Posto tuo by Max Croci, to end with Il Permesso, directed by Claudio Amendola, where he confirms his acting ability, thanks also to an outstanding physical transformation.

In December 2018 he goes back to the theatre with “E’ questa la vita che sognavo da bambino?”, directed by Edoardo Leo, on a tour around Italy until may 2019.

Since 2012 he is vicepresident of the 1caffe.org non-profit organization, which tries to bring back the tradition of the “suspended coffee” charity initiative.