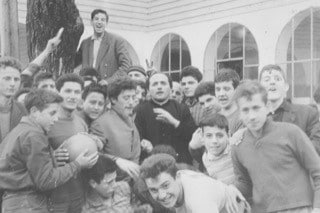 “He was a happy man, he always spoke with happiness on every occasion, as if the whole world gave him happiness and not human scraps, as if miseries were an opportunity to be happy”.

This is how a friend of his described Don Emilio de Roja, a Friulian priest who died in 1992 and who significantly marked the recent history of his land. One speaks, surprisingly, of a man who would have had every reason not to be happy, to be angry and discouraged by the difficulties and human limitations he encountered in his own family of origin, and then during the war and finally in a ‘difficult’ neighbourhood among ‘difficult’ boys. However, Fr Emilio had a great reason to be happy: the certain recognition of Christ’s love and trust in a Providence that never abandoned him in what he felt was his task: to be always building! This building was easily visible in what he created, but even more so in the ability he had to see in the people the good they had inside, perhaps contradictory to the evil they were capable of.
Thus he recounted:
“A mother handed over her son to me and she seemed to be his accuser. Madam, do you think he is your son? And what could I do if she talked about him like that? He mumbled and in a whisper began: ‘It’s true, but hearing the teachers, the guards, the mayor, the parish priest complain, I thought I’d have to talk like that too, but if you say you’ll help me, I must hope to save my son.”
The exhibition proposes an encounter with this man, his passion for God and man, through his story, his writings, his friends and those (including the curators) who had the good fortune to have known him.