Here are all the important numbers of the 2019 Meeting 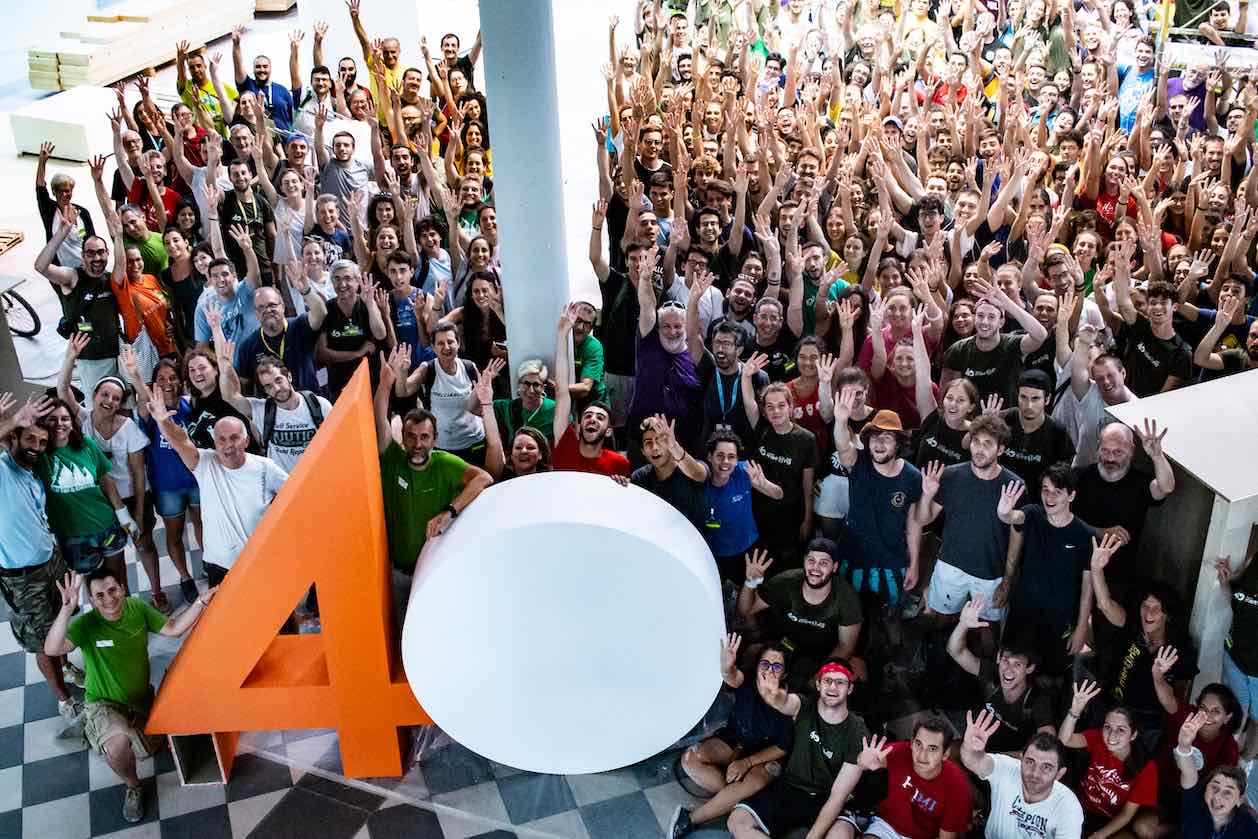 There are 179 meetings scheduled in the official program of the 40th edition of the Meeting for friendship amongst peoples ("Your name was born from what you gazed upon", 18th -24th of August, Rimini Fair), 25 shows, 20 exhibitions , 35 sporting events. 625 speakers who will take part in the meetings. But despite their consistency, the numbers mentioned, relating to the official program of the Meeting, do not cover the entire range of proposals present at the Fair. They do not include, for example, the 38 book presentation meetings, organized by the Italian Association of Cultural Centers (in the "Book corner" space). All meetings and exhibitions are free. You can also follow the various proposals of the Sport billboard, free of charge.

The space dedicated  to the meetings at the Rimini Fiera, are  transformed by the work and creativity of thousands of volunteers will host many events: 130 thousand square meters occupied by the 2019 Meeting, which uses 12 pavilions in the Fair, the central Hall and 8 connecting pavilions. Outside the large trade fair will be presented the inaugural show "Midnight Barabba" (at the Teatro Galli, in the center of Rimini, on the evening of August 18, with a replica the following day) and some sporting events.

Meeting rooms and shows At the Rimini Fair there are 3 large halls prepared for the meetings of the 2019 Meeting: the Intesa Sanpaolo B3 Auditorium (which can hold 6,000 people) and which, with limited transformations, becomes the Intesa Sanpaolo B3 (3,000 people) , then the Sala Neri UnipolSai Room (800 people). Numerous meetings will take place in the 7 Arenas (150 to 250 seats each) they are set up in the Fair Areas in areas and are dedicated to specific issues: Subsidiarity and work, Health, CdO for innovation, Routes, International Area, Polis Edison (with the theme of the city), Brain (The wonder of the human brain). Some meetings are also scheduled at the Sport Village (in C7).

The Auditorium, the Sala Neri and other containers will also be used for the shows that are being held at the Meeing. In the Open Arena Illumia Piscine West, in the late evening, we brought back 6 musical groups that are performing for the public for free.  There will be free entrance in the A2 routs arena , there also be 2 listening guide on the musical series of ‘’Spirito Gentil’’.

Volunteers There are around 2,500 people who, during the week of the Meeting, will freely dedicate energy, skills and even holidays to allow the event to take place and guarantee the particular environment to happen. They come from all over Italy and about 110 people come from abroad: United States, Canada, Taiwan, Russia, Ukraine, Belarus, Lithuania, Spain, Argentina, Paraguay, Peru, France, Germany, Great Britain, Switzerland and others countries.

The work of the volunteers is divided into 15 departments; the numerically more consistent ones are the General Services Department (more than 500 people) and the Catering Department (450 volunteers).

To complete the picture, we need to remember and add the other 350 people (mostly university students) who, during the "pre-Meeting" (from August 10th  to 17th ), worked for free to set up the Fair.

Director quotes  "We are continuing the process of deepening some major issues", reports the director of the Meeting Emmanuele Forlani, "at the center of the areas and spaces dedicated to subsidiarity and work, cities, health, international cooperation, artificial intelligence, brain human and testimonies from the world. For each of these themes we offer meetings, exhibitions and shows. This study and this articulation have led to a significant increase in meetings and speakers ".

"We have also strengthened the Sport area," adds Forlani, "starting a partnership with Master Group Sport, one of the main companies that organize sporting events in Italy."

Budget and sponsors The estimated costs of the 2019 Meeting are around 6 million 500 thousand euros. The items relating to the receipts predict, in descending order: communications services for companies (about 4 million euros), receipts from catering (about 1 million 100 thousand), commercial activities, tickets for paid events and contributions from private individuals (linked to fundraising).

There are 3 Main Partners of the 2019 Meeting (Tim, e-Distribuzione, Intesa Sanpaolo),  six Official Partners (Atlantia, ACI, Banca 5, Ania Foundation, Eni, UnipolSai). Conai figures as Sustainability partner), while 4 are the Media partners: the Vatican News portal, Vatican Radio Italy, Avvenire, the Sussidiario.net. Overall, around 130 companies and institutions participate in the event in various ways and use the Meeting as a way to communicate to the public.

Catering 21 thousand square meters occupied by the various catering proposals of the Meeting, kitchen space included. They value the gastronomic traditions of quality in some Italian regions and together they carefully consider the need of families to be able to have lunch at affordable prices. "Fast food" lines (piadina and pizza included) are added, therefore, the different proposals of typical restaurants: from Romagna "Azdora" to "Garbino" (with roasted sardines and mixed fried fish), from Bergamo " Il Caravaggio ”at the“ Sagra pugliese ”, from the“ Ristorante del Salento ”, at the vegetarian“ Benessere Orogel ”. Also it is noteworthy to mention that the restaurant "Annatura" (in B1) has quality products. Also "Le Palme" Self-service operating at the Fair should be added. Overall, a potential of 28,000 meals a day is assured during the week of the event. An offer for all tastes and needs.

Children's Village In Hall A5, an entire area of ​​the Meeting (4,500 square meters including the "Family's Fast Food") is dedicated to children: every day we will have games, songs and dances, entertainment, workshops, exhibitions, meetings and shows. Note - it is just an example - that the 6 meetings, the 7 shows and the 3 exhibitions promoted by the Village are not included in the calculation of the Meeting events and therefore are added to the program numbers reported at the beginning.

Parking and shuttles In the outdoor areas of Rimini Fiera, free parking for Meeting visitors: over 9,000 available parking spaces. Three lines of Start Romagna bus will connect the Rimini fiera with Piazza Marvelli, Viserba (FS Station) and with Fellini Airport. Tickets can be purchased at normal sales points and also at the Meeting Ticket Office.

Trains at the Meeting During the week of the event, 7 Frecce (4 Frecciabianca, 3 Frecciarossa), 6 Intercity trains and 25 Trenitalia Regional trains will stop every day in Rimini Fiera. Timetables on www.meetingrimini.org and on the Trenitalia website.

Online meeting and figures from the Press Office #meeting2019  will be the official hash tag of the 40th edition, which will be the reference point for all updates, curiosities, news, previews, multimedia contents, interviews, comments  , and to keep up with the meeting in real time you can follow it on seven social media platforms such as Facebook, Twitter, Instagram, Youtube, Flickr, Linkedln and Google MyBusiness. The event website www.meetingrimini.org has been completely renovated since the beginning of this year. In recent months, the new "Rimini Meeting" app was also launched, available on Google Play for Android smartphones and on the Apple Store for iPhones. The program includes , news, events, the social media wall and some exclusive features such as booking guided tours of exhibitions and the personalized myMeeting agenda. As for the press office we report those of last year. In the month of August 2018 alone, a press office of 160 media staff, 3,000 services published in newspapers, radio, TV, digital media, 600 accredited journalists, with the presence of all the major newspapers and major national broadcasters including Tg1 , Tg2, Tg3, Tg4, Tg5, Studio Aperto, La7, La7, SkyTg24, Tv2000 and RaiNews.