A dialogue on an encounter happened 800 years ago 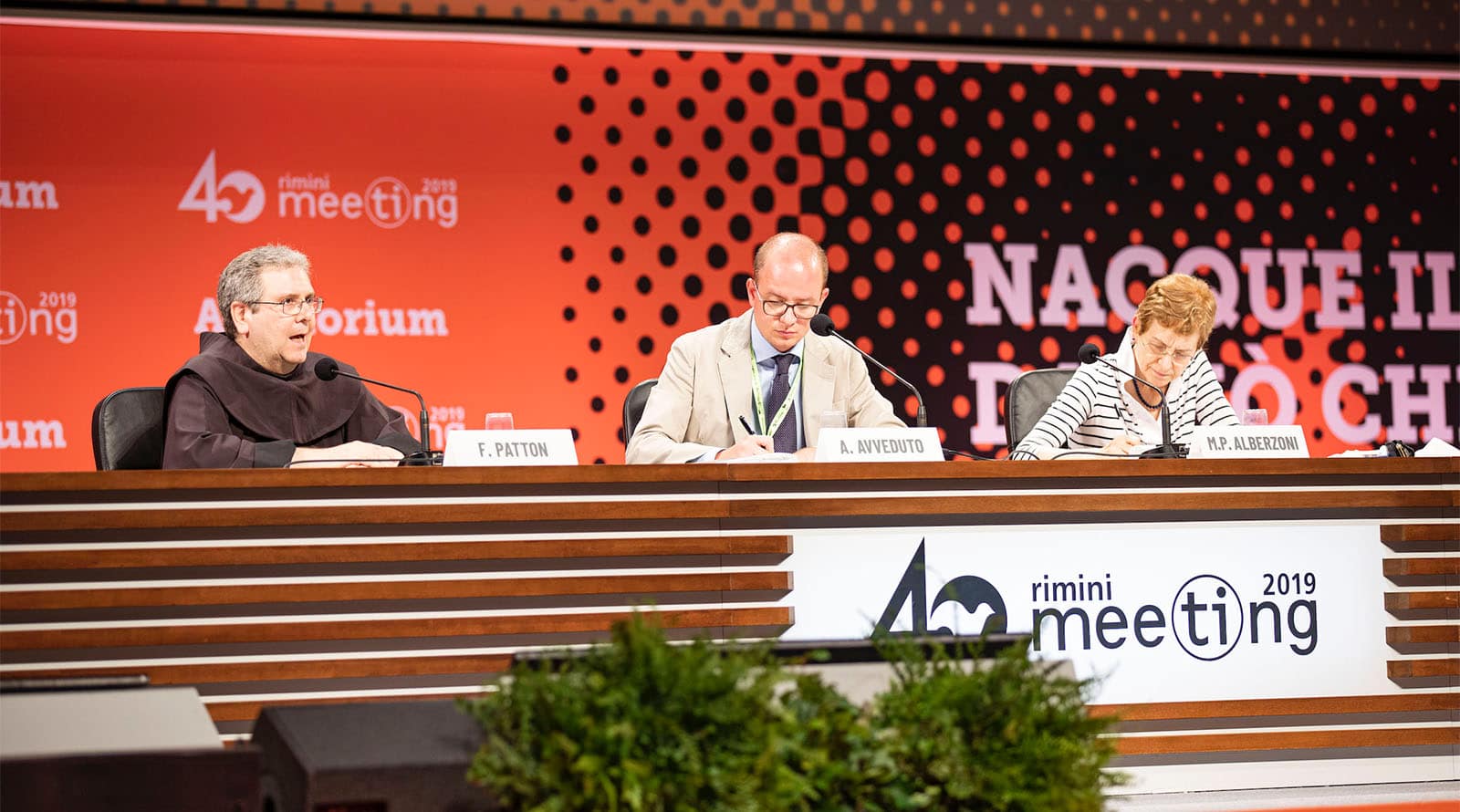 <<The past eras are linked to today through an uninterrupted chains of events, all resulting from each other>>. This is we saw this evening at the presentation of the most important exhibition of this Meeting’s edition.

SAINT FRANCIS AND THE SULTAN: THE LEGACY OF A MEETING THAT HAS LASTED 800 YEARS. Presented by Maria Pia Alberzoni, Full Professor of Medieval History at the Catholic University of the Sacred Heart in Milan; Francesco Patton, Custodian of the Holy Land. Introduced by Andrea Avveduto, Journalist, Pro Terra Sancta Association.

The journalist asked questions on the nature and the origin of the exhibition to Professor Alberzoni: <<Why did he go? Why was he left untouched? Why are we still talking about this after 800 years>> The professor eagerly answers: << This fact still amaze us. It was a very unusual enterprise from an occidental friar. It was impressing at the time and still impress us for the prophetic results that influence us today>>. Alberzoni analysed the historic situation at the time of the journey, she explained that Francis was following a crusade, he visited the friars that had been in Egypt for two years and probably the idea of the meeting was born there. Malek el-Kamel was famous even outside the Islamic world for his kindness and his inquisitiveness, this could be the reason why Francis wanted this meeting, that linked this two men of faith, to whom was very clear what was important in life. <<What was the foundation of this appreciation that is revealed by the sparse hagiographic data we found? Their identity. Only who knows who he is, could have a dialogue with someone else. Their difference didn’t create a distance. Neither of them had wanted to convert the other, but something between them changed>>.

The “Earlier Rule” was born from this encounter, written in 1221, in which Francis says how to deal with the Saracen, as Patton says: <<The news is that this rule allowed us to be present in the Holy Land today, something written 800 years ago. The Minor Friars have been putting themselves at the service of everyone, for the love of Christ, since then with examples such as taking care of the sick or educating people,. This kind of language had a value also for the Muslim, because is universal. This style allowed us to take root in the territory with a clear identity accepted by everyone, as an example they call us Abuda, father. That shows respect and affection. All of this educated us to be ready to see all the signs our Lord put in front of us. The results of this experience, if we look at it with foresight, it’s what allow us to be there today>>.

Alberzoni reconstructed the event using the documents of that era: << Francesco received the permission to go from the Cardinal, he faced the Sultan and, certainly, spoke of the faith. In the chronicle the Sultan asked Francis to pray God because he shows him the right way and he understood the big risk that Francis took to save his soul>>. Alberzoni continues with an hypothesis: << It would be really interesting to know what they told each other, there’s no trace of that: we know that Francis used to pray with expression of praise for God the Highest. I imagined the friars singing praise to the Lord in front of the Sultan. I think the meeting was based on this because the Sultan would have agreed with that. Francis had found the perfect medium, he proposed what united them>>.

This is even more impressive when we think that, in that years, many theologians wrote to sultans about the principles of faith, without any results. Francis understood that what moves and facilitate the encounter is experience. This experience is admirably express by the Custodian of the Holy Land in his last speech <<Today this is very actual. That encounter remains a milestone. God spoke to us through history and told us the an encounter is possible. Francis abolished the word enemy. I think that Francis’ position shows is usefulness both on a practical and of faith point of view: the alternative to encounter is collision, to peace is war, to dialogue is violence. Then there’s a reason of faith, but there’s more: I firmly believe in Christ and I believe he shows Himself in the face of anyone I met. If a creature exists is because God wanted him. It’s not difficult to imagine this was Saint Francis thought, that arrives to us through his friar, in a room full of people in Rimini and that fill our heart of hope>>: