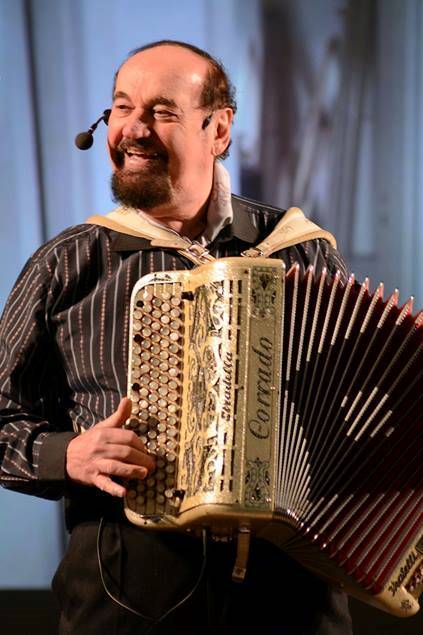 Authentic infant prodigy, Corrado Medioli undertook the study of the accordion at the young age of 6. At 12 years old, decisively brought to music and already in possession of great ability, he was taught by the maestro Luigi Fenari Trecate, at the time director of the Conservatory of Parma. It was Trecate who pushed him to perfect himself also in the classical repertoire, making him a versatile and prepared musician, already requested for by local orchestras.
At just 18 years old, Medioli was already hired by an important ensemble in Milan, which allowed him to be known at a national level, implementing his experience and skills, thanks to the contribution of experts and excellent professional musicians. In these same years, Medioli also participated in many musical competitions, always ending up among the top finalists.
Strong with an artistic curriculum already rich with success, Medioli founded, together with other notable musicians from Parma, the band “The Players,” which remained active until 1975, with the exception of forced break, due to Corrado Medioli’s military service. In ’76, the musician joined the group “I Cadetti di Gigi Stok,” which eventually changed its name to “Franco Dini e Corrado,” and finally arriving as “Corrado e la sua orchestra” (“Corrado and his orchestra”).
Also active in record-making, Corrado Medioli has 7 musical collections. Regarding live music, remember that, after his national tours conducted at a young age, there were many concerts held abroad, including England, France, Germany, Switzerland, Denmark, Pakistan, and Yemen, where Medioli was greeted with great enthusiasm.
Together with the orchestra and his son Stefano, graduated in piano and jazz from the Citizen’s Conservatory, Medioli has several times accompanied the tours of Giuni Russo, the valuable and dearly departed interpreter, who passed away recently, and has collaborated with the singer actress Maddalena Crippa. Among his more important performances are his participation as a soloist at the concert held by the Arturo Toscanini Orchestra of Parma and with the same symphony on BBC at Wembley, London. He was also recently honored by the “Museum of Accordionists” of Recoaro Terme, at which there is a cast of his right hand, together with those of the most important Italian accordionists.

EVENTI
2021 - Guareschi. A job for me too
2019 - WORDS AND MUSIC. “The Importance of Being Veronica – Your Name Was Born From What You Gazed Upon”