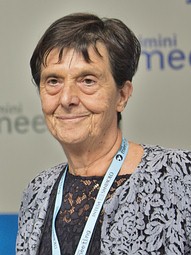 Teacher, co-founder of the Meeting for Friendship among Peoples.

Teacher of Italian and Latin in high schools, co-founder of educational and cultural works. From 1971 to 2014, she taught first in state high schools and then in the parity high schools of the Karis Foundation of Rimini, to whose path of foundation and development she had collaborated from the beginning.

Since 1980 she has shared the responsibility of the Meeting for Friendship Among Peoples Foundation, of which she was President from 1993 to 2020. The history and development of the Meeting have led her to experience significant meetings in many parts of the world. The Italian Embassy in Moscow, the Unesco headquarters in Paris, the Library of Alexandria in Egypt, the Palace of Doctors in the Temple of Mount Koya in Japan, the UN headquarters in New York, are some of the places where Guarnieri has spoken as a speaker in public meetings. She has met many personalities: from John Paul II to the Dalai Lama, from Rabbi David Rosen to Cardinal Ratzinger, from the Secretary General of the World Muslim League Abdul Karim al-Issa to the Grand Imam of Al-Azhar, Ahmed A-Tayeb, from Carlo Rubbia to Sergio Marchionne, from Francois Michelin to Riccardo Muti. She has participated in cultural and editorial initiatives. In 2001 she collaborated in the editing, for the types of Bur Rizzoli, of a Divine Comedy commented. He is currently a member of the Scientific Committee of the Unicampus San Pellegrino Foundation. In 2004 she received the Sigismondo d’oro, an award given by the Municipality of Rimini to those citizens who have honored the city with their activities, and in 2020 she was awarded by the President of the Italian Republic Sergio Mattarella the honor of Grande Ufficiale dell’Ordine al merito della Repubblica.

PARTECIPAZIONI
2021 - Dante: the journey of the self, our adventure
2019 - 40 YEARS OF THE MEETING. On the occasion of the publication of the book by Salvatore Abbruzzese
2019 - THE INDIVIDUAL AND SOCIAL FRIENDSHIP. INAUGURAL CONFERENCE OF THE 40th EDITION
2019 - YOUR NAME WAS BORN FROM WHAT YOU GAZED UPON
2019 - AFTER THE TRAGEDY, BETWEEN INNOVATION AND BREAKDOWN
2019 - LEARNING TO LOOK AT THE WORLD THROUGH THE EYES OF POPE FRANCIS