Children’s Village of the Meeting 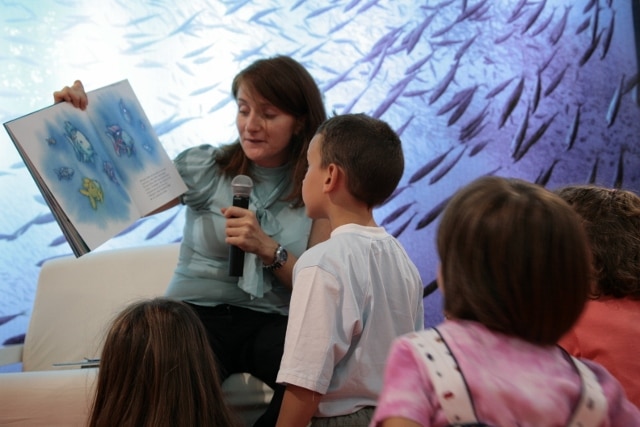 Also this year the Meeting thinks about the little ones and provided the  Children's Village for them: 3000 square meters entirely dedicated to children aged  1 to 12 years old, with exhibitions, shows and workshops with the purpose of welcoming the little ones, helping them to fully grasp the theme of the meeting. "The meetings, the exhibitions, the shows, the books proposed are an integral part of the Meeting, they talk about its intentions, they participate in the proposal, they breathe the tension", explains one of the Village creators, Luigi Ballerini, psychoanalyst and writer of children’s books. «The Children's Village starts with an esteem for the youngest – it is full of questions, impulses and desires - and the desire to allow them to have a true experience of the Meeting. If the participants are small, the proposal designed for them has the ambition of being large, It is not predictable and banal, it’s not only pure entertainment but It also has content ".

At the Children's Village of the Meeting a new friend will arrive this year, Popotus, the friendly hippo who is also a journalist of Avvenire, the protagonist of the weekly insert dedicated to children. Every day at 3pm Popotus will guide children, accompanied by their families, to discover many interesting subjects. After a short digital trip the children will be able to release their video interview to the special reporter! The activity is suitable for all young people aged 6 to 12 years.

In collaboration with Avvenire, we will also have a journalism laboratory. The editorial staff will be open on Sunday the 18th , Monday the 19th , Tuesday the 20th  and Wednesday the 21st  of August at the 11:00 am for the editorial meeting and at 5:00 pm for the correction and final drafting of the articles. The laboratory, by reservation, is suitable for editors aged nine and above who will be followed and accompanied by professional journalists.

The 2019 program of the Children's Village proposes two exhibitions: "The unexpected streets of Hoghwarts, lights and shadows of the characters of the Harry Potter saga", dedicated to the friendship between the characters of the famous saga, and "Let's discover the world with Leonardo Da vinci’s eyes ": A spectacular video projection by Anna Gibellato, art historian and tour guide, to explore the genius of Leonardo Da Vinci (ages 7 and up), with guided tours, both in Italian and in English.

The daily show of the Village is inspired by the poetry of Karol Wojtyla "The name", from which the title of the 2019 Meeting is also taken "Your name was born from what you gazed upon". There will also be appointments and traditional characters of the Village like the likeable Capobanda, among the protagonists of the theater, or the magical show with soap bubbles. Every day, dozens of art workshops, math, science, writing, reading, group dances, board games, for all ages, and the Children's Library. This year at the Village you can also play with Harry Potter and go hunting for Magical objects in Harry Potter.

Every day at 9:00 pm, the Village will offer an evening show. On The 18th  of August will go on stage "Stay calm, everything will go wrong. Federico Fellini, a man as big as a child " with live drawings, on stage Pietro Grava and Anna Formaggio, directed by Father Marco Finco, proposed by the Rosetum Cultural Center, and freely adapted from the book by Andrea Pallucchini" My name is Federico Fellini ". On 19th  of August ‘’Finally science’’ presents the interactive scientific show "Magia v / s Scienza", with Stefano Rossi and Alessio Meneghelli, in an engaging succession of chemistry, physics and optical illusions. Suitable for all ages, from 6 to 99 years old. On August 20th , the Brescia Laboratory Theater presents the animated show "DIABOU N’DAO Fiabe africane" by and with Anna Teotti, directed by Sergio Mascherpa. On 21st  August "Emanuela e il lupo" will be staged, a performance by Livio Valenti, with Eleonora Angioletti and Livio Valenti, proposed by Teatro Nata. On August 22nd  is time for classics "The Three Little Pigs". The show by Tiziano Feola and Benedetto Zenone is proposed by the Cultural Center The Guardians of the Goose. On stage the puppets of Ada Mirabassi, music and verses by Antonio Cericola. On August 23rd  the Master Villa will return to the Meeting with Mariella Chieco in a show with songs "Grammatically so all over the world".

On 19th  and 20th of August, a special guest  arrives  at the Children's Village, a friendly dinosaur  named Prezzemolo will be joining us from  Gardaland Amusement Park. The nice mascot will be available to anyone who wants to take a selfie . By Gardaland also fun quizzes on photos and movies of the Park. Gadgets and prizes will be given to  who answer correctly.

The village is a special, colorful and welcoming place, where children and young people can participate in  the meeting most suitable for their age and needs ,gaining full experience of the themes proposed by the festival, available in other languages for the older ones .The title of the fortieth edition «is in perfect harmony with the Village and its spirit. The name, that belongs to me and makes me recognizable and callable in the world, comes from the encounter with  others. And the Village really wants to be a meeting place. Meeting between children and young people, then among peers, experiencing the possibility of being together in an orderly, fun and interesting way. Meeting between young people and adults who make accompany them and do activities that gives them motive and makes them realize what they’re capable of. Meeting with books, workshops, shows, exhibitions to cultivate existing passions and discover new ones. Because at the Meeting, at the Children's Village, you become a little older. Even in a week. Even only in a few days », concludes Ballerini.