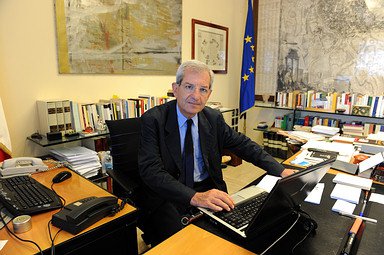 He was born on September 25, 1941 in Dire Daua, Ethiopia, where his father, journalist and communist, had to emigrate. The family was later interned by the British in a concentration camp where Luciano Violante was born and remained until 1943.
Graduated in law in Bari in 1963 with prof. Renato Dell’Andro, 110 with honour and dignity of print, entered the magistracy in 1966.
In 1970 he became a freelance law professor at the University of Turin where from 1974 to 1981 he was a professor in charge of public law institutions.
He is an investigating judge in Turin until 1977. From 1977 to 1979 he worked at the Legislative Office of the Ministry of Justice, dealing mainly with the fight against terrorism.
He is deputy from 1979 to 2008, first on the PCI lists, which he enrolled in the same year, then in the PDS and then the Ds-l’Ulivo and the PD.
In 1983 he won the chair of criminal justice institutions and criminal proceedings and resigned from the judiciary.
From 1980 to 1987 he is responsible for PCI justice policies; He subsequently became vice-vicar of the House’s parliamentary group.
He was part of the Commission of Inquiry on the Moro case, the Anti-Mafia Commission, the Parliamentary Committee on Security Services, the Commission for Reforming the Code of Criminal Procedure, the Justice Commission, the Constitutional Affairs Commission and the Council for the Rules of Procedure Of the House of Deputies.
He is President of the Antimafia Commission from September 1992 to March 1994.
From 1994 to 1996 he is Vice President of the Chamber of Deputies.
From 1996 to 2001 he is the President of the Chamber of Deputies for the XIII Legislature.
From 2001 to 2006 he is chair of the Parliamentary Group of Leftist Democrats at the House of Representatives.
From 2006 to 2008 he is Chairman of the Constitutional Affairs Committee of the Chamber of Deputies.
In 2008, in some public interviews, he announced that he did not intend to recruit to open spaces for the renewal of the executive group.
After the cessation of parliamentary activity, he held a lecture lesson on the history of the Republican Parliament in the Master in “European Parliamentary Institutions and Constitutional History” at the Faculty of Political Sciences of the University “La Sapienza” in Rome.
The President of the Republic has designated him as a member of the Special Working Group on Institutional Reforms set up on March 30, 2013.
With the post of Chairman of the Editorial Committee, he was invited to become a member of the Expert Committee, established in 2013 by the President of the Council of Ministers. Enrico Letta.
He is currently president of “italiaadecide”, an association for the quality of public policy.
He is the author of texts of law and criminal procedure.
He published in 1994 for Bollati Boringhieri “Singing for the Mafia Mafia Festival”.
He edited the volumes “Dictionary of the Institutions and Rights of the Citizen”, Editori Riuniti, 1996, “Mafia and Anti-Mafia – 1996 Report”, “Mafia and Italian Society – 1997 Report”, “Mafia Money – Report 1998”, Laterza .
For Einaudi he also edited the volumes of the Annals of History of Italy “Crime, 1997”, “Law of Justice”, 1998, “The Parliament”, 2001.
For Mondadori published the book “Italy after 1999”, 1998.
In the Saggi di Laterza the volume “The two liberties. Contribution to Left Identity “, 1999 and, in May 2002,” The Mafia Cycle “.

He is the author of the essay The Evolution of the Parliamentary Institutions, published in “Il Caso Italiano 2” – 2001, Garzanti (translation of the volumes “Italy: resilient and vulnerable” of the Review – Daedalus of the American Academy of Arts and Sciences).
For Garzanti, in June 2002, he published, in collaboration with Professors Carlo Federico Grosso and Guido Neppi Modona, the Criminal Justice and Criminal Procedure Manual “Criminal Justice and State Powers”.
For Piemme Edition, published in 2004 “Secondo Qoelet – Dialogue between Men and God”; In 2006, “Letter to the Youth on the Constitution”; in 2007, for the Piemme edition, “Uncorrect. 10 steps to avoid the failure of the Democratic Party. ” In 2011, always for Piemme, “Journey towards the end of time. Lilith Revelation “.
In October 2009, for the Einaudi edition, he published “Magistrates” and, in March 2013, “Politics and Lying”.
For San Paolo Editions, in January 2014, he published “Governing. Blessed are those who administer the city with the eyes of the other. ”
For Rubbettino Editore, in May 2014, published “The Primacy of Politics” interview by Mario De Pizzo.
In December 2014, for the Einaudi edition, he published “The duty to have duties”; In 2017, always for Einaudi, published “Democracies without memory”.