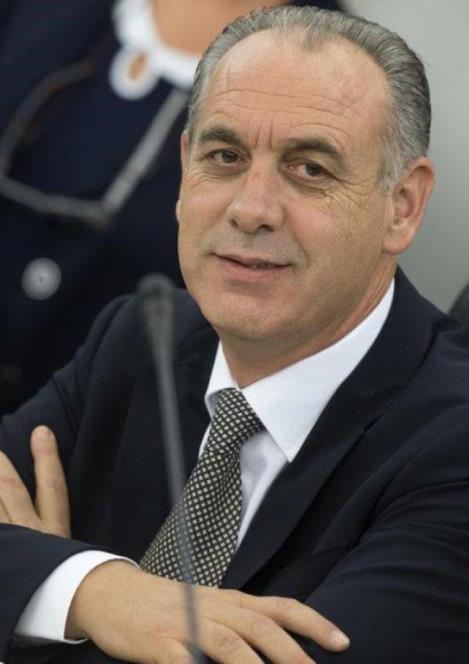 Giovanni Legnini has been elected Vice President of the Supreme Judicial Council on September 30th 2018, during the Plenum Session chaired by the Head of State.
He was born in Roccamontepiano (Chieti) on January 6th 1959. He is married and has two children.
He graduated in Law in 1984 in Gabriele d’Annunzio University of Teramo with the highest grade and honors.
Lawyer, enrolled in the Register of Court of Cassation Lawyers, he practiced the profession of Lawyer until 2013, when he was appointed Member of the Government.
His institutional journey matures in an intense political and social engagement in the progressive and reform movements.
From 1990 to 2002 he has been Mayor of Roccamontepiano, from 2004 to 2007 President of the City Council of Chieti.
Being elected Senator in 2004, he carried out an intense parliamentary activity in the Senate of the Republic until 2013.
After being elected in the Chamber of Deputies in the XVII legislature, in 2013 he became executive as State Undersecretary of the Prime Minister and from 2014 in Ministry of Economy and Finance.
As a Senator, from 2004 to 2013 he has been Member of the Budget Committee, of which he has also been Vice President from 2006 to 2008.
He was also member of the Council for Elections and Parliamentary Immunities, of the Parliamentary Committee for the Prosecution Proceedings, of the Commission for Litigations and of the Guarantee Commission.
From 2008 to 2013 he has been Courtroom Secretary for PD Group in the Senate.
While exerting his Parliamentary mandate he has been speaker of several Public Finance Deliberations, among which two Finance Acts, protagonist of the examination and approval of many draft laws dealing with economy and finance, proponent of several justice draft laws, of which he followed the exam and the discussion.
Being State Undersecretary for the Prime Minister during Letta Government he dealt with the implementation of the Government Program, with publishing, institutional information and communication; he has also been delegated by the executive branch for the anniversaries of national interest (among which the celebrations for World War 1 centenary and the seventieth of the Resistance).
Undersecretary in the Ministry of Economic and Financial Affairs in Renzi Government, he exercised the mandate for the financial profiles of internal and European cohesion policies, and for the reconstruction and development of Aquila city and the Abruzzo territories hit by the April 6th 2009 earth quake, for the Custom and Monopolies Agency, for the activities of the Inter-Ministerial Committee for Financial Planning (CIPE), for the financial profiles and monitoring of the repayment plans from the local governments, including Capital Rome, for the implementation of the applicable laws under the jurisdiction of MEF.
On September 10th 2014 he is elected Member of the Supreme Judicial Council by the Parliament in plenary.