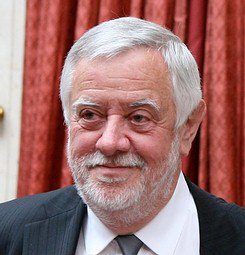 Yves Coppens was born in 1934 in Brittany.
He has been trained in geology, zoology and botany (degrees at the University of Rennes) and paleontology (doctoral degrees at the University of Paris, Sorbonne).
His career, starting in 1956, has been conducted in different institutions, all of them in Paris, successively at the National Scientific Research Center (in the department of Vertebrate Palaeontology and Human Paleontology of the Sorbonne and in the Institute of Paleontology of the National Museum of Natural History), at the Museum of Man (professor and deputy director in 1969, Director in 1979), before being appointed Chair of Anthropology of the National Museum of Natural History in 1980 and at the Chair of Paleoanthropology and Prehistory of the College de France in 1983.
Yves Coppens is member of several scientific institutions all over the world, the French Academy of Sciences, the French Academy of Medicine, the Royal Academy of Sciences, Literature and Fine Arts of Belgium, the royal Academy of Medicine of Belgium, the Academia Europaea, the national Academy of Sciences of Roma, the royal Anthropological Institute of Great Britain and Ireland (honorary fellow), the Royal Society of South Africa (foreign associate), the Academy of Malagacy (associate), the Academy Hassan II des Sciences et des Techonologies of Morocco, the Academy of Medicine of Sao Paulo, the Academy of Sciences, Arts and Cultures of Ivory Coast, etc.
Yves Coppens received numerous scientific awards from France (prix Edmond Hébert 1963 of the Academy of Sciences, prix André C. Bonnet 1969 of the Academy of Sciences, Grand prix Jaffé 1974 of the Academy of Sciences, Grand prix scientifique 1975 of the Foundation of France, silver medal 1982 of the Scientific Research Center, the André Duveyrier medal 1989 of the Society of Geography, the prix 2008 of the Georges Pompidou Foundation), prix Agrippa d’Aubigné 2010) ; from Belgium (the Fourmarier medal 1975 of the Geological Society of Belgium, the Vandenbroeck medal 1987 of the Belgian society of geology, paleontology and hydrology, the Chaos award 2009 of the University of Liege), from Italy (the Fabio Frassetto prize 2005 of the Accademia dei Lincei, the Nonino prize 2007, the Andersen prize 2008), from Sweden (the Carl Gustaf Bernhard medal 1997 of the royal Academy of Sciences), from UNESCO (the Kalinga prize 1984) and so on.. He received honorary doctorates from from the Universities of Chicago, Bologne, Liège, Mons, and honorary citizenships of 29 towns (France and Morocco). His name has been given to an asteroid, and to institutions, universities, colleges, school, libraries, labs, promotion, streets and a Chair at the University of Recife (Brazil).
He is Grand Officier de la Légion d’Honneur, Grand Officier du Mérite, Commandeur des Palmes académiques, Commandeur des Arts et des Lettres, Commandeur de l’Ordre du Mérite de la Principauté de Monacoo, Officier de l’Ordre national du Tchad,etc.
Yves Coppens is a field paleontologist; he has organised, led or co-led many expeditions in tropical Africa (4 campaigns in Chad, 1960-1966; 10 campaigns in the lower Omo valley in Ethiopia, 1967-1976; 5 campaigns in the Afar desert in Ethiopia, 1972-1977) and in Asia (Indonesia, the Philippines, China, Siberia, Mongolia), and many surveys in north and south Africa, the Middle East, south America as well as excavations in France, etc.. As a result of this field research, he collected tons of fossil vertebrates, hundreds of Hominids (he signed or co-signed 6 new Hominid taxa) and of course an impressive amount of data. His research focused on Vertebrate Paleontology (Proboscidians, Hippos), their assemblanges and their meaning in Paleoenvironments, climates and biochronology, as well as on Paleoanthropology. He is renowned for his hypotheses showing the correlations between hominid evolution and the evolution of the environments (the East Side Story 10 million years ago was not geographically confirmed but the (H)Omo event, 2,7 million years ago was adopted worldwide). His lab has also pioneered important research on the functional anatomy of early hominid (demonstration of early double locomotion, bipedal an arboreal, of some of them, Australopithecus afarensis and Orrorin tugenensis). He authored and co-authored a thousand of scientific papers and books.