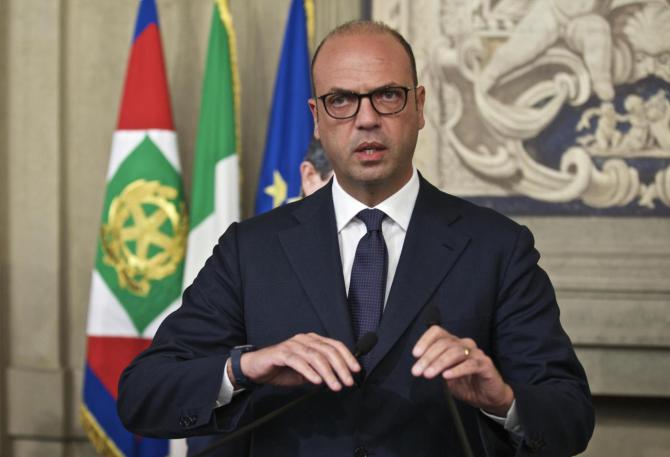 Angelino Alfano, Minister of the Interior, was born in Agrigento in 1970, and is now married with two children. Alfano graduated from the Catholic University of Sacro Cuore in Milan as a lawyer, and obtained his PhD in Law from the University of Palermo. He is a published journalist, having collaborated with many regional and national publications since 1989.
In 1994, Alfano was elected Provincial Councillor of the College of Agrigento, having the functions of President of the Commission of General Affairs and the coordinator of “Polo delle Libertà” within the Provincial Council.
At 25 years of age, he was elected Deputy of the Regional Sicilian Assembly, becoming the youngest member. Alfano sat on the Parliamentary group for Forza Italia for the Regional Assembly of Sicily from 1998 to 2001.
In 2001, Alfano was elected Deputy of the Italian Parliament for the Western Sicilian district, for the party Forza Italia.
He was a member of the Commission for the Budget, Treasury, and Planning from June 2001-April 2006, the Parliamentary Commission for the investigation of the Telekom-Serbia affair from July 2002 – September 2004, the Parliamentary Commission for Regional Issues from July 2001-April 2006, and the Committee for Legislation since July 2001, serving as secretary from April 2002 to August 2005 and as Vice President from August 2005 to April 2006.

In 2002 he was the National Manager of the Political Department of the South for Forza Italia. Alfano was the rapporteur of the Budget Law and the State budget for the 2003 financial year and multi-annual budget for 2003-2005.
In February of 2005, Alfano was appointed regional coordinator of Forza Italia for the Sicilian Region, a role from which he resigned in May of 2008 following his appointment as the Minister of Justice for the Government of Berlusconi IV.
In 2006, Alfano was re-elected Deputy to the Italian Parliament, for the western Sicilian district, as part of the Forza Italia party.
From June 2006 to April 2008, Alfano served on the Commission for the Budget. Treasury, and Planning.
In the XVI Legislature, Alfano was re-elected Deputy to the Italian Parliament as part of the People of Liberty party.
In May 2008, he was appointed Minister of Justice, the youngest “Guardasigilli” in the history of the Italian Republic.
Alfan was elected Secretary for the Political Party “People of Liberty” in July of 2011, resigning from his role as Minister of Justice later that month to dedicate himself to the party.
At the political elections of 2013, Alfano led the People of Liberty to the Chamber of Deputies in 4 Italian districts (Sicily, Lazio, Piemonte 1, and Piemonte 2).
On February 27th, 2013, Alfano was re-elected as a Deputy to the Italian Parliament for the People of Liberty, and from April 2013 to February of 2014, Alfano served as the Minister of the Interior and Vice President of the Council of Ministers for the Letta Government. In February of 2014, Alfano became Minister of the Interior for the Renzi Government.
From December 12, 2016 is Minister of Foreign Affairs and International Cooperation for the Gentiloni Government.

PARTECIPAZIONI
2020 - PUBLIC HEALTH: CAN PUBLIC AND PRIVATE BE INTEGRATED?
2017 - FROM NORTH TO SOUTH. DEFENCE AND PEACE IN THE WORLD