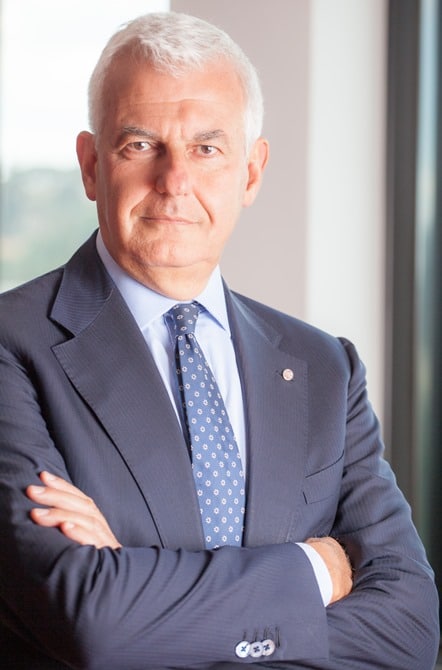 Alessandro Profumo is Chief Executive Officer of Leonardo S.p.a. since 16 May 2017.
He is also: Honorary Chairman of AIAD (Italian Industries Federation for Aerospace, Defence and Security); Chairman of the Fondazione Ricerca & Imprenditorialità; member of IIT Foundation’s Council (Italian Institute of Technology) and member of COMI (Italian Committee of Market Operators and Investors) within CONSOB (Italian Companies and Stock Exchange Commission); member of the European Round Table for Industrialists (ERT); member of the Scientific Committee of the Banca Impresa 2030 Observatory.
Born in Genoa, Italy on 17 February 1957, he holds a degree in Business Economics from Bocconi University.
In 1977, he began his career at Banco Lariano, where he worked for ten years. In 1987, he joined McKinsey & Company where he was in charge of strategic and organisational projects for financial companies. In 1989, at Bain, Cuneo & Associati, he was in charge of developing relations with financial institutions.
In 1991, he joined RAS – Riunione Adriatica di Sicurtà, where he was responsible, as General Manager, for the banking and parabanking sectors. In 1994, he joined Credito Italiano (today Unicredit), where he was appointed Deputy General Manager and put in charge of Planning & Group Control. A year later, he became Chief General Manager and, in 1997, Chief Executive Officer, a position that he maintained also with Unicredit Group till September 2010.
From April 2012 to August 2015, he served as Chairman of Monte dei Paschi di Siena Bank. From September 2015 to May 2017, he was a Board Member and Chairman of Equita SIM.
Furthermore, Profumo was Chairman of the European Banking Federation in Brussels and of the International Monetary Conference in Washington, D.C. He was also on the International Advisory Board of Itaú UniBanco (Brazil) and was a member of Sberbank’s Supervisory Board (Russia). He was a member of Eni’s Board of Directors from 2011 to 2014, and from July 2015 to April 2017. He was also a member of Mediobanca’s Board of Directors and Executive Board, and a member of Bocconi University’s Board of Directors.
Profumo was awarded Grande Ufficiale Ordine al Merito della Repubblica Italiana (Grand Officer Order of Merit of the Italian Republic) in 2005.
He serves on the Board of Directors of the Together To Go (TOG) Foundation.