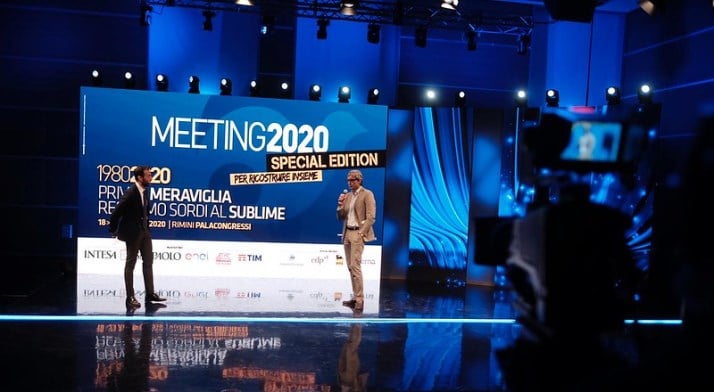 «During the lockdown we decided to carry out the Meeting, despite the more burdensome restrictions  imposed by the emergency, because we are convinced that the event, after the acute phase of the pandemic, will be a great opportunity to share the questions emerged on the meaning of life and suffering, questions and concerns related to education and work, in order to face with awareness, responsibility and hope the recovery of a more sustainable and fair economy, of a dignified social coexistence, of a national and European policy at the service of man ". This is what the new president of the Meeting Foundation Bernhard Scholz had to state on the occasion of the presentation of the Meeting 2020 Special Edition, which was held this morning in live streaming from the Palacongressi of Rimini.

Among those present, the president of Istat (Italian National Institute of Statistics) Gian Carlo Blangiardo, the president of the Emilia Romagna Region, Stefano Bonaccini, the president of the San Niccolò Conservatorio of Prato, Mariella Carlotti, the professor of Industrial Bioengineering at the Sant'Anna School of Pisa, as well as the former Minister of MIUR (Ministry of Education, University and Research), Maria Chiara Carrozza, the ambassador Giorgio Marrapodi, Director General for Development Cooperation / Ministry of Foreign Affairs and International Cooperation, actor and director Gioele Dix, the Mayor of Rimini Andrea Gnassi, the Bishop of Rimini Monsignor Francesco Lambiasi and the CEO of the Italian Exhibitions Group IEG, Corrado Peraboni.

"The title of the Meeting" Without wonder, we remain deaf to the sublime ", chosen at the end of the previous Meeting, might have seemed unsuitable for this historical moment, but it turned out to be prophetic," added Scholz. "Many experiences lived in these dramatic months have shown that the wonder of one's own life and the life of the other make us more aware and more creative, less likely to discontent and resignation. Only those who are grateful and conscious will be able to face the challenges that await us.

The Meeting, which will be one of the first moments of collective reflection on post-Covid Italy and Europe, with an eye to the future, will be held from the 18th to the 23rd of August in "blended" mode, that means it will be broadcasted via the digital platforms (website, social media, Youtube channel), while some events will be held with the presence of the public in the venue of the event, which this year will be the Palacongressi of Rimini.

The new dual structure will allow to make the Meeting more international: all speeches and shows will be broadcasted live in Italian and English and several meetings on demand also in Spanish, German and other languages. Furthermore, in about ten foreign countries, as well as in fifty Italian cities, public events are planned for the diffusion and transmission of the event.

Of great importance, according to tradition, the speakers, including the 2006 Nobel Peace Prize winner Muhammad Yunus, intellectuals and opinion leaders such as Sabino Cassese, Umberto Galimberti, Enrico Letta, Ermete Realacci, Luca Ricolfi, Luciano Violante, Joseph Weiler ( who will hold the report on the subject of the edition), the president of the CEI (Italian Episcopal Conference) Monsignor Gualtiero Bassetti, the president of the Fraternity of CL Don Julián Carrón, the writers Paolo Giordano and David Quammen.

The extensive list of representatives of the institutions and politicians invited, starts from the President of the European Parliament David Sassoli, to the European Commissioner for Economic Affairs Paolo Gentiloni, to Paola De Micheli, Roberto Gualtieri and Roberto Speranza. The theme of the relationship between the different institutional levels will be addressed twice: on Saturday the 22th of August with the presidents of the Region, when Stefano Bonaccini, Massimiliano Fedriga, Maurizio Fugatti, Jole Santelli, Giovanni Toti, Luca Zaia will answer the questions of Sabino Cassese and on Friday the 21st of August with influential protagonists of the Italian political scene in a meeting promoted by the Parliamentary Intergroup for Subsidiarity to which Maria Elena Boschi, Graziano Delrio, Luigi Di Maio, Maurizio Lupi, Giorgia Meloni, Matteo Salvini, Roberto Speranza and Antonio Tajani were invited.

Among the topics  that will be treated in the Special Edition, care and health, the relationship between subsidiary culture and sustainable development, Europe, scientific issues (focusing this year on what it means to be "living"), challenges of post-Covid, work, the future of democracy, innovation, international cooperation, education, art, literature, with ample time as tradition also to testimonies from the world. Every evening on the billboard of the shows, from Dostoevsky to Fellini, with various original productions, and the exhibitions, much loved by the Meeting public, which will also have a digital version that can be consulted from the site.