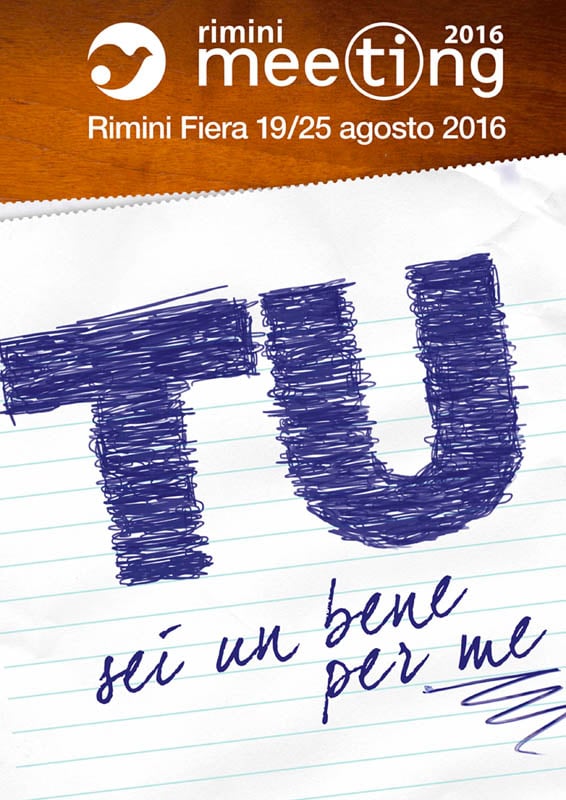 You are a good for me

Our current historical context is characterized by a profound crisis that has as its consequence a general air of mistrust when facing the present and looking to the future. Social and civil models of society that up to now had safeguarded the common good are crumbling; an entire generation, that of the NEET, have given up studying and working; the phenomenon of immigration and of refugees is inundating–unbridled and seemingly unstoppable–Italy and all of Europe; and the violence of terrorism, as we saw in the tragic events in Paris, is growing in an ever more threatening way. The other, what’s different, what’s “outside,” all appear to be threats, they come to be seen and are for the most part considered through the lens of instrumentalization and utilitarianism.

In the midst of these dramatic circumstances, Pope Francis declared an Extraordinary Jubilee of Mercy. “Mercy: the fundamental law that dwells in the heart of every person who looks sincerely into the eyes of his brothers and sisters on the path of life. Mercy: the bridge that connects God and man, opening our hearts to the hope of being loved forever despite our sinfulness.”

But human nature and reality itself point to the unavoidable need for a relation, a relationship, a continual encounter with reality as the primary necessity to discover the truth of oneself and of the world. Family, children, friends, colleagues, the poor person you meet by chance on the streets: they are challenges we have to come to terms with every day. Often the substitution of difficult relationships and “contacts” in flesh and blood with those that are more comfortable, automatic, and always available–but ultimately, absent–from the virtual world can generate a profound solitude, as well as the illusion of autonomy, of a final extreme freedom without any ties one depends upon. Men and women need others, to share their desires, plans, difficulties, sacrifices, fears and pain: to share the reason for their existence. Community is formed by and exists precisely for this.

Man’s “I,” therefore, is first and foremost a history made up of faces, relationships and circumstances that play out over the course of time.

How is it possible to look at others in a new way, not simply tolerating what’s different, but intuiting and betting on the fact that “you” are and represent an ultimate positivity that “I” need to live? What makes a human position like that just described possible?

The history of the 20th century, with its world wars, reminds us all of the attempts of various and opposing ideologies to eliminate each other, to eliminate the other: it brings back the memory of atrocious suffering and millions of deaths, but also that at a point in history it was possible to perceive the other–who up to a few days before was the enemy to fight–in their diversity, as an asset, as a good: it was precisely in that moment that Europe was born. In fact, without an experience of positivity capable of embracing everything and everyone, it’s impossible to begin again.

Through exhibitions, performances, roundtables and witnesses, the 2016 Meeting in its variety of languages will tell stories of integration and of forgiveness, it will focus on the great emergencies we face today, and will give the protagonists of culture and expression the chance to speak. It will confront the challenges of technology of innovation, attempt to look at work and the economy without moralistic demonizing, and it will bring together cross sections of history gone by. We also hope that the next Meeting can be an explosion of the beauty of a positivity and a hope capable of attracting the freedom of all people and make them desire change for themselves, and change for the world.