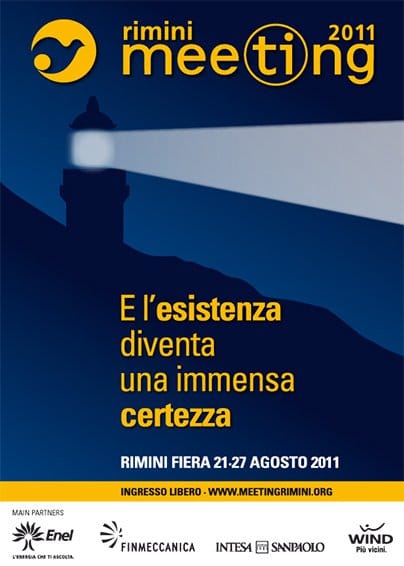 And existence becomes an immense certainty

“And existence becomes an immense certainty” is the title that we chose for the XXXII edition of the Meeting. It stems from a simple, but at the same time dramatic observation: nowadays, in the most common mentality, in the consciousness with which each one of us faces the challenges and hardships of our life, it seems that it is not possible to have true certainty any more. It is here, at the bottom of our own being, that the hidden reason of many “crises” of our times reveals itself: such crises not only express the objection to or the loss of certainties that were considered acquired – in politics as well as in economics, in science as well as in ethics, in culture as well as in society – the same way it often happened during other historical times. What is at stake today, the era characterized by the great shadow of nihilism, is something more radical, therefore also the challenge that it sends us is more radical: human beings are not capable of certainty anymore; rather, each certainty is of our own making, and, finally, just a great illusion.

When we think about the meaning of our existence, aren’t we all tempted, as children of our time, to believe that our origin and our destiny are at the mercy of luck, and that after all we have no power against the uncontrollable forces of a blind fate and of a meaningless fortuitousness? Yet, most of the “modern” thought, – according to which man is the only, true maker of his own destiny, without any need to refer to a greater meaning, – had claimed to provide a “scientific” and “political” strategy that would govern the uncertainties of living, the mortal risk of solitude and meaninglessness, source of resentment and violence.

The only certainties still in our possession – we believe – are those produced by the technological control of the world. Anything else, values and emotions, feelings and opinions, belong to relativism. But we acknowledge more and more that reality, both at a natural level and at a social level, is much less governable than what we think, and most of all we discover that the existence of the I gets weaker and weaker in its reasons. The perception that “our powerlessness is incurable,” wrote the sociologist Zygmunt Bauman, “makes us feel an even more dreadful and devastating uncertainty than in the past.” The whole game of existence is played here, in the certainty or uncertainty regarding the reason why each one of us is in this world.

The Meeting will try to accept this challenge of our times, reopening a game that many had already declared over. And, according to its style, it will do it not in virtue of a more shrewd cultural and political analysis, but starting from the experience in progress of people who are not satisfied with a concept of their own existence as destined to nothingness. Men and women who don’t censor the weight of uncertainty, nor escape the work that it demands, but who live it as the evident sign that we are not the masters of ourselves, on the contrary we are in relationship with something Else which continues to reach us in our life.

Before any calculation about our abilities or inabilities, the basic perception of our I is that of a certainty. And not a cheap assurance or a guarantee at our disposal, but a certainty of belonging: we are of somebody. Initially we are certain about ourselves, because our mother’s face meets us and she offers us her breast. This is the first perception of life, which afterwards remains as a constant, even though hidden or suffocated. Before any uncertainty there is a certainty: it is a given, an encounter, an invitation.


The Meeting will try to tell and witness this work of the I that starts over from the evidence of an encounter, of all those encounters where the meaning is present in the flesh, for which it is worth living, loving, building, and also suffering. The certainty we are looking for is not an ideology, nor a strategy, nor a psychological persuasion, but it is the certainty that makes us recognize what we already “are.” Not so much that the things will be fine as we expect them, but that we ourselves are in relationship with the one Who makes us continuously.

This is why existence, as the Meeting’s title says, becomes a certainty: as a matter of fact, it is not about knowing ahead of time what will happen to us and in the world, but being available to make ourselves be provoked by what happens, that is, to ask for its meaning and to recognize its reason. And certainty is immense precisely because it is not of our own making, but rather it is the discovery of what reaches us and asks of us each time. This certainty would not exist without our freedom

After all, also the Meeting is a way to take seriously the invitation we receive every day from the events and encounters that happen: the invitation to respond with all our expectation, always putting at stake our restlessness.