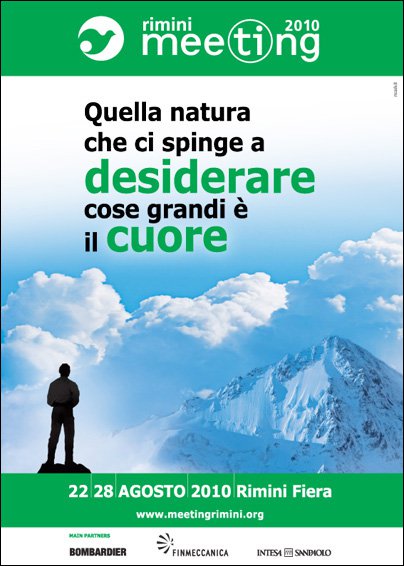 “That nature which pushes us to desire great things is the heart” is the title of the 31st Meeting for Friendship Amongst Peoples, echoing Camus’ Emperor Caligula, “I simply experienced a sudden thirst for the impossible… I need the moon, or happiness, or immortality.” All people, no matter what their race, culture, religion or tradition, have this desire for great things, for something infinite. An aspiration that on many occasions we tend to neglect and forget, aided and abetted first of all by a certain mentality that considers human beings the chance result of chemical and biological forces, or at best, an evolutionary process.

We are immersed in a culture that tends to erase “man’s humanity,” the “want and emptiness … the chief sign of the grandeur and nobility of human nature” expressed by Leopardi in his Thoughts, and risk affirming a purely materialistic conception of life. The provocation in this year’s title, instead, affirms the opposite. The human being’s nature is first of all the heart, which expresses itself as desire for great things. The driving force of all human action is this aspiration to something great, the need for something infinite. The human being is relationship with the infinite. This striving is the unmistakeable feature of the human, the spark of every action, from work to family, from scientific research to politics, from art to provision for daily needs.

The Meeting will try to document how in today’s reality it is first of all necessary to start from the humanity of each person, making the needs and desires of human beings the soul of big choices as well as everyday ones. This is the point that unites us and thus the beginning of real dialogue among peoples.

People who consider their humanity seriously are those who are never tamed and satisfied and who face life with expectancy of something great. Cesare Pavese wrote, “Did anyone ever promise us anything? So why then are we awaiting?” Expectant awaiting is the very structure of human nature, the essence of the soul. Great desires and great aspirations aren’t an obstacle or something that complicates existence; rather, they’re what makes human beings irreducible, precisely because they are the sign of our relationship with the infinite.