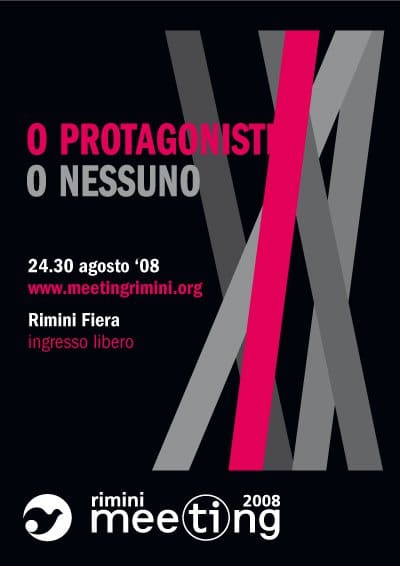 Either Protagonists or nobodies

The 29th edition of the Meeting for Friendship Among Peoples titled Either Protagonists or nobodies seeks to reflect on the concept of the person. The word protagonist, a positive nuacne of the concept of person, is much used in our society. This is why we must bear clearly in mind the historical context in which live.

If we were to ask ourselves who is the protagonist today, for the conventional wisdom we would have to answer that it is someone whose main purpose in life is success. Without it we find ourselves deprived of a precise identity, or rather of that possibility of gaining recognition which in some sense seems to give us the illusion of really being “where it’s at.” In other words it is a kind of levelling down which compels us to follow the dictates of the prevailing fashion in all and for all. Then, without social recognition, today people will think you’re no one. But what type of person is it who pursues at any cost whatever will distinguish him from others? It is the star, meaning the person who sets himself up as God. In the attempt to be free, a person of this kind wants to possess reality in absolute independence. Yet he then finds himself a slave to circumstances, things and obviously success. Having severed his ties with reality, he becomes a captive to success, remaining in a human condition of passivity which compels him to express himself in a sad and empty formalism. But a man who counts on his own strength alone is doomed sooner or later to fail. The inevitable result of this process is skepticism and cynicism.

What is stronger than success, less ephemeral than success? Fr. Luigi Giussani told us: "Being protagonists does not mean having the brilliance or the spirituality of some, but having a face of one’s own, unique and unrepeatable in all of history and eternity." The true protagonist is the man with filled with wonder who makes the moving discovery, which always springs from a precise encounter with reality, that he has a face which is unique and unrepeatable. A free man: free because, almost by a sort of paradox, he is aware he is tied to the origin of life itself, to that mysterious design from which he intuits that every thing depends. A religious man: capable of comparing himself with the whole of reality and while admitting the category of possibility, being open to a possible revelation. An irreducible man: one who cannot content himself with any ideological, biological or historicist reduction. A man who knows why he loves: embracing the people and circumstances of life, both happy and sorrowful, he seeks to judge everything in a continuous quest for the ultimate meaning for which reality was created.

Through encounters, debates, acts of witness, exhibitions and performances, we will document the dimension of this type of man, who is the sole and possible revolution in our age.