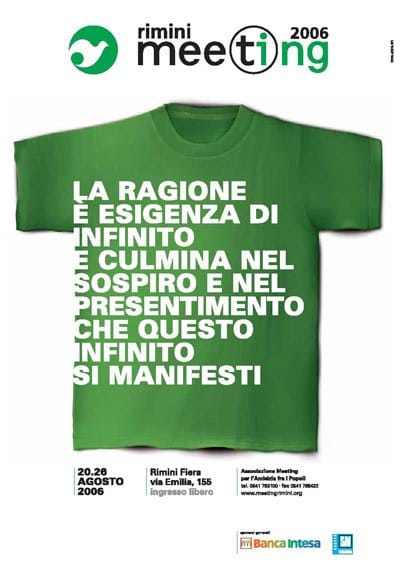 The title of the XXVII edition of the “Meeting for Friendship Among Peoples,” drawn from a conversation between Fr. Giussani and university students in 1992, places the problem of reason at the center of attention.
Reason is the exigency of the Infinite, inasmuch as it is connatural with man’s existential need not to have his own vision of life limited to measurable confines. Only when reason, and all the faculties deriving from it, opens wide toward something that is not “finite” and thus does not claim to be the measure of all things, is its capacity to know and to affect the texture of reality fully prized and not mortified. This opening is guaranteed by the fact that man, by nature, desires and needs to stretch out toward something infinitely greater than himself.
In contrast, the man who by a free act does not open out to the Infinite, because of a cowardly will for self-preservation or a rationally distilled calculation, reduces the scope of reason, of which he is the only possessor; in his self-celebratory presumption to be able to explain everything in the light of reason, he refuses to admit the evidence of the fact that the Infinite (the Absolute or the Mystery) permeates all of reality. Because of his obstinacy, man thus ends up depriving reason of a substantial part of its cognitive energy.
This is what happens with the deviations of contemporary reason, as described in the encyclical Fides et ratio, from scientism, which “refuses to admit the validity of forms of cognition different from those proper to the positive sciences,” to historicism, which defines “the truth of a philosophy on the basis of its adequacy to a certain period and a certain historical task,” thus denying “the perennial validity of the truth,” and to nihilism, whose oblivion of being “inevitably leads to the loss of contact with objective truth, and consequently, with the foundation for the dignity of man.”
In fact, in denying reason the “inevitable affirmation” of the Infinite - inevitable because necessary to the affirmation of the grandeur of human nature - intelligence contracts upon itself, and rationalism fractures into meticulous analyses; the “breath and sigh,” the indispensable means of approaching to the point that it is possible to comprehend the infinite Mystery, is suffocated; the capacity for “presentiment,” the highest level of intelligence, dissolves into forms of divination, similar to presentiment but emptied, such as foresight or prediction, which have hardly anything in common with the power of existential involvement that is the hallmark of presentiment.
Thus, the experience of freedom as well is sealed off in an aseptic measure, while freedom is like “a great breath, a vast and deep breath” that takes on consistency even “living in restricted spaces, because the horizon of man in the relationship with things is the Infinite” (Fr. Giussani). The culmination of human intelligence truly consists in breaking through, projecting itself toward the infinite Mystery, even through the restricted spaces in which man is often forced to live.
Only in this way does reason “culminate in the sigh and the presentiment that the Infinite may reveal Itself.” In the sigh and the presentiment that the Infinite may reveal Itself, human intelligence crosses over its own boundaries. The sigh is a way of feeling things, full of expectation and desire, deeply moved. But the sigh cannot help but be a desire clouded by melancholy. The sigh is pierced through by “inexpressible groans.”
Presentiment is the positive and freely engaged faculty of perceiving that reality is a set of signs that point to Something Other; sometimes we are able to decode them, but often it is not given to us to do so. However, reason does not suffer because of this, as long as it adapts to recognizing that beyond reality “there is Something Other,” of which reality is the visible sign.