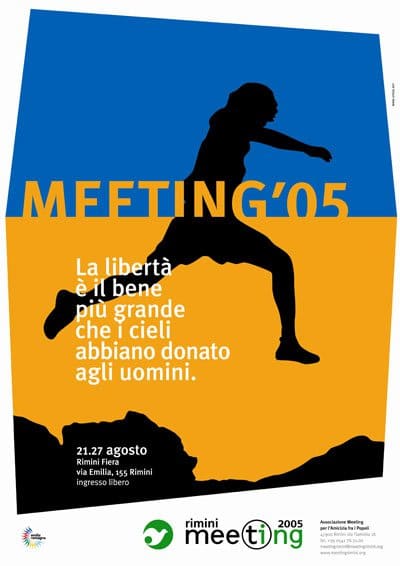 The title of the 26th Meeting is taken from a phrase that Don Quixote of the Mancha pronounced, without rhetoric whatever to his squire Sancho Panza: «Freedom, Sancho, is one of the most precious gifts that heaven has bestowed upon men; no treasures that the earth holds buried or the sea conceals can compare with it; for freedom, as for honour, life may and should be ventured».
Literary criticism has often stopped to consider with what spirit the hero of Cervante's novel, one of the greatest masterpieces of modern literature, uses the word freedom but, whatever the interpretation, whether in a lay or religious context, we cannot underestimate the fact that the "gift" is attributed by Don Chisciotte to “heaven” and it is well known that heaven, in the ancient world and especially in Jewish culture, is synonymous with God.
Freedom has always represented a big problem for human beings. It corresponds to a value, the contents of which have been the subject of a thousand considerations. But though the meaning of the word freedom might appear immediately clear and its use easy and to be taken for granted, both its application in personal experience and the theoretical investigation of the meaning of freedom have given rise to contrasting, if not violently opposed considerations. The value of freedom is proclaimed first and foremost at political level. In terms of morals, modern mentality, but not only, considers that the triumph of freedom coincides with the elimination of all restraints and gives human beings the ability to choose whatever they instinctively desire.
Whenever nihilist scepticism does not deny human beings the faculty of being free, for modern man, being free means doing as he pleases. That the elimination of restraints and the satisfaction of one's desires are not enough to make human beings free and happy is shown by experience itself, which indicates that satisfying a desire is never total, because every satisfied desire is followed by another and then by yet another. On the contrary, human beings feel and are sometimes put in the condition to experiment that what they aspire to is of infinite proportions, something that lives in a non-finite dimension, that they can turn to even in their finiteness.
An example of an apparently free man is Nietzsche's superman, who states, «Only where there is life, is there also will: will for power». This is the same as saying that a free man is he who gives free rein to his desire for power, a concept that continues to thrive at both political and economic level. But however powerful the superman's will is, it too inevitably shatters against a measurable measure - felt whenever we are not successful - and his freedom is immediately compromised.
The concept of freedom, of liberal positivism is similar to that of Pico della Mirandola during the Renaissance period. For Pico, a free man is a man who builds himself. Man is he who makes himself.
Now let us take a look for a moment at the position of the Christian. For the Christian too, freedom is action, an active relationship. A relationship with God, active because it is full of desire, awareness and expectation; it is a relationship pervaded by the inextinguishable thirst for a query of revelation, it leads to a God who the Christian knows to be immeasurable. «If men wish to be free from all that which surrounds them, if they wish to be free of everything that exists around them, they must be dependent on God. The freedom of human beings is their dependence on God» (don Giussani, Meeting 1983).
The problem with modern mentality is that it considers with more or less malevolent sufficiency this position which liberalism sees, in the best of cases, as abstract and the a result of the imagination. It often occurs that human beings who wish to open out to the Mystery of God - not to the infinite which loses itself in the air, but to God incarnate and who has the face of Christ - are often considered crazy. And yet, if we think about it, the condition of freedom is guaranteed to human beings only by a relationship which, ultimately, stretches beyond their limits. A relationship is first of all founded on a bond, which human beings vitally need so as not to feel alone; a bond that is not subject to the calculations human economy.
God generously challenges human beings, prompting them to be free in the most mysterious way and bringing back to them the greatest gift He has. He challenges them with paternal generosity and leaves them this last hope: freedom. For human beings, freedom becomes synonymous with liberation, liberating salvation, the faculty of going beyond one's measurable measure. In fact, it is before God that human beings can foretaste, albeit imperfectly, the greatness to which they have been called by Christianity and which has been pre-empted by a Psalm: “What is man that you should care for him?”. The greatness of man is an effect of his total valorisation by God, who takes care of him. No philosophy or thought exists as capable as Christianity of valorising man, whose every negative act is redeemed by the freeing action of mercy.