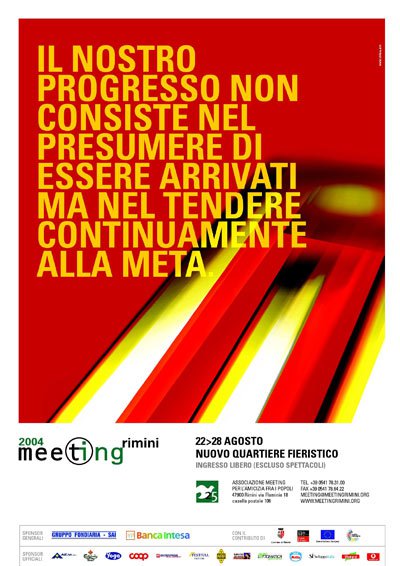 Our progress does not consist in presuming we have reached our goal, but in continuously striving to achieve it

The next Meeting will be the 25th and will coincide with the 50th birthday of Comunione e Liberazione - important occasions that provide a chance for historical evocation. All those who have taken part and continue to take part in creating the Meeting - over two thousand people every year - are very excited about celebrating this twenty-fifth anniversary encounter: with enthusiasm, joy and the certainty of having made progress, but without the presumption of having reached the goal.

Hence, the exhortation contained in a letter of St. Bernard to the Benedictine monks of Saint Bertin, and which has inspired the title of the next Meeting, is particularly suitable for celebrating this anniversary; it contains an incitement never to stop, «Run brothers, to reach your goal. And to do it, you must understand that the goal has not yet been reached».

The word used here is goal, aim, while the implication is endeavour and commitment. Every goal presupposes a commitment: human beings must be ready to undertake it, with all the intelligence and freedom given to them, but they must never be satisfied with what they have achieved. Such feverish and prolific movement - just the opposite of satisfied and over-nourished immobilism - is fuelled in the certainty that a goal is not something to be possessed; but also in the certainty that the effort of making progress is useless unless it is accompanied by a supreme goal towards which we must all strive. The condition of peace in our lives does not in fact stem from accumulated fortunes, but rather from finding ourselves in touch with the Infinite: the meaning, origin and goal of our lives.

Human beings wonder whether any achievement, including those that upgrade the human condition, is capable of satisfying their insatiable yearning for good. In this sense, progress cannot consist in presuming that the goal has been achieved, but rather in an increasing endeavour to become acquainted with the Mystery that generates and governs life.

Acknowledging the Christian claim - that this Mystery, God, has become a man - is what enables us to accept an ongoing strain. «Acknowledging and following Christ thus generates a characteristic existential attitude, whereby human beings become erect and untiring walkers towards a goal not yet reached, certain of the future because this rests entirely on His presence» (don Giussani). The image of a man walking, which in Christianity translates into the word viator, pilgrim, is the most explicit expression of our form of existence.

The certainty of being on the right road is what makes hope well-grounded - the hope of reaching the goal. But the certainty of being on the right road also makes the present fully prolific; the journey itself becomes prolific; dissatisfaction itself becomes vitally prolific, because positive is the undaunted quest for it, insatiable the curiosity that surrounds it, passionate the desire to scrutinise as much as possible and keep that which is good, in a critical and constructive spirit. All this is given to Christians. For them, the meaning of life is revealed in the density of time.

Consequently, the value of freedom, an asset today misunderstood or unappreciated, consists in putting onto the field all the forces at disposal to desire one's own fulfilment over time, in the face of the Infinite, without the presumption of either possessing or measuring it.