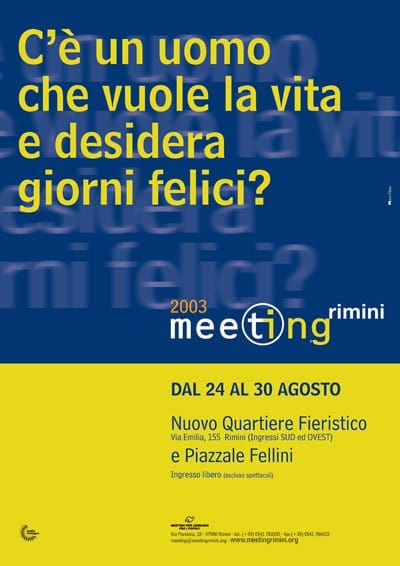 Is there a man who longs for life and desires happy days ?

«Is there a man who longs for life and desires happy days ?»
The title of this year's Meeting has been inspired by a verse of the Bible, Psalm 33, a psalm attributed to David and which contains a series of questions - or perhaps it would be better to say, exhortations, from God to human beings. God asks man whether he wants to see long days and desires to live happily, because the reply, which everyone would expect to be affirmative, is in no way to be taken for granted. It was not to be taken for granted at the time of David and it is not to be taken for granted today when human beings who close their eyes to the positiveness of existence cannot be sure of achieving true happiness and at most make - or even want - " to experience ephemeral pleasures", a fleeting enjoyment; this way they reduce the greatness of their desire. The Psalms describe the never-ending dialogue of the God of Israel making contact with His people. In Psalm 33 He urges His distracted son and, in a period that even then must have been sad, difficult and tragic, calls him.
God calls and leaves human beings completely free to answer. The verse has a double translation: «What man is there who… », or: «Is there a man who longs for life and desires ?». The second version places a more dramatic accent on the question, as if seeking in the desert a man that desires life and happiness and to live many days full of joy; God pre-perceives a shadow of scepticism and disbelief in human beings, precisely because happiness, according to current thought, is an image we have created - worldly things, money, power. But happiness is, in fact, something else. The Christian, called upon and able to reply affirmatively to the appeal for positiveness, does not live the experience of this vocation as a mechanical will to convince him that life is beautiful. Being called is tantamount to welcoming something new, something that completes and satisfies our deepest desire, which in fact reveals what we most anxiously want, without however cancelling the inevitable dimension of pain.
There is no doubt that the world has little esteem for such a vocation, considered to be scandalously irrational. To an increasingly greater extent in fact, the conviction is taking root that everything lasts only for a short time, because only things that finish exist, and so people say, "There is no hope". Heidegger, one of the most quoted philosophers in cultural pages, says, «The question arises: what is the purpose of supreme values unless these are certain to provide the ways and means of achieving the goals they bring with them?».
So, what then is the purpose of the things human beings do? What purpose is there of doing more than strictly necessary when it comes for instance to work? Common mentality gives a puritan and moralising answer - because society requires it. It is as if we were simple cogs in a mechanism, servants without dignity: farmers are needed for agriculture; engineers for engineering; teachers for schools.
The only human beings that can experience happiness are those who leave room in their lives for the infinite, because their hearts consist of the need for the infinite. The experience of happiness belongs only to human beings who feel the infinite in their lives, who feel called upon not to do to die, but to do to continue living. It is hardly by chance that the reference to a relationship with the Infinite is to be found adequately emphasised in Saint Benedict's Rule, meaning in an experience where physical and metaphysical, natural and supernatural become an objective possibility of life.
"Who is that man who longs for life and desires to live happy days ?". In the Bible, the figure of Jacob is that which describes such a man - Jacob is the personification of the strong man, of the man who firmly wants to be happy. He is the person who sees the promise come true, but with how much suffering: he is ordered to depart to seek a wife; in a dream, he is promised a lineage that will invade the world. After he has married and become wealthy, he is ordered to return to the house of his father, but Jacob is scared of the vengeance of his brother, Esau. God appears to him again, and he struggles with him all night. Before blessing him, He strikes him on the hip and leaves him lame.
This year's Meeting wishes to announce that we can all be men like Jacob, bent by the Mystery, but surprisingly alive and operative in the world. Alive and active, because we are ready to answer «Me» to that question.