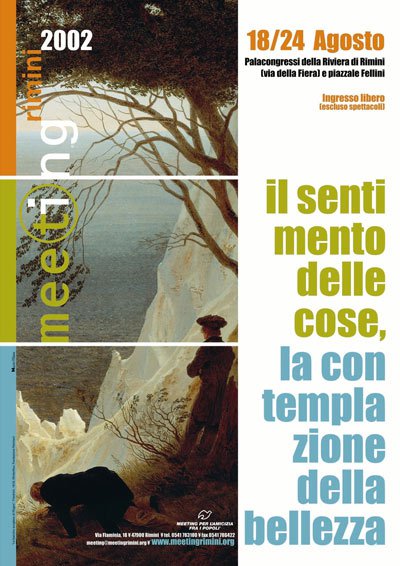 The feeling of things, contemplating beauty

When tiredness takes the plug out, the first feeling we should have is the feeling of things”. This consideration, so vivid and fascinating, is part of Don Giussani's comments to a hymn to the Praises of the Valserena Trappist Monastery, published in one of the most beautiful books: All the earth desires your gaze. What is meant by feeling of things? Man's ability to acquire an awareness of the things that surround him. The feeling of things is not an intimist impulse of the soul, but rather a stage in our knowledge of reality. The person “who feels” is so completely transported towards something, meaning towards the reality of things, as to immediately assume a waiting attitude. Things invade his gaze and his mind; they penetrate with the same impelling force released when we open our eyes for the first time. The heart of the "observer", thirsting for truth and ready to be moved, is in a state of feverish expectation. The loving feeling for things also depends on how aware we are of them, and on how we recognise, within reality, that originally desired value - beauty. What beauty is precisely and just how many different definitions have been given of this word by the various cultures, is nonetheless a very complex issue. Beauty has always been considered in a relationship between truth and good, and not only by Christian tradition. If beauty conforms to truth, it can only be in tune with nature and reason. Consequently, for Christian-Catholic thought, which has repeatedly addressed this theme, from Augustine to Balthasar, beauty being ontologically part of God, it is reflected in creation, as splendour of the truth. Thus it acquires consistency and concreteness; it is not an ephemeral and transitory thing. It is something that guides the freedom of human beings ethically. A very close relationship exists between ethics and aesthetics and in contemplating beauty, all moral actions are experienced more intensely because "the enthusiasm that stems from beauty cannot be compared with that which stems from dedication”.
From the feeling of things to the recognition of beauty is only a short step because if we look at reality with love, beauty cannot remain hidden, but comes out into the open. A further step is represented by contemplation, a word that has fallen into disuse or which is wrongly referred to spiritualistic sublimation processes, devoid of any cognitive consistency.
A contemplative life does not contrast with an active life. Quite the contrary, it integrates and illuminates it. Contemplating beauty means rationally recognising its revealed and incorrupt nature. Contemplation is synonymous with astonishment, where astonishment is not just a simple sentimental reaction. Contemplation contains a rational tension that translates into a clear and moved gaze able to recognise beauty.
Meeting 2002, in the multiform variety of its events and in the festive context of encounter involving people, experiences and realities from different countries, faiths and cultures, has this year taken as its theme, and not inappropriately, precisely an issue like the contemplation of beauty.