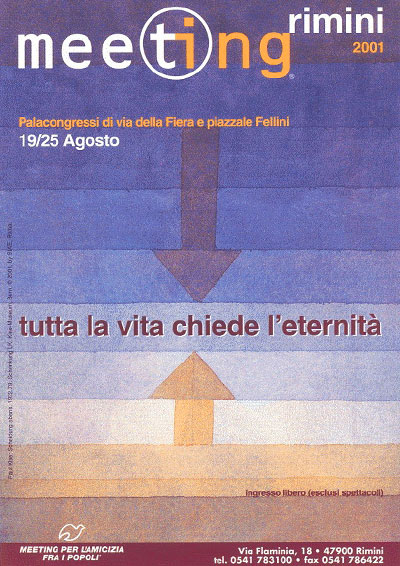 All of life asks for eternity

In an article that appeared in the "Il Corriere della Sera" on Thursday 17 August 2000, commenting the Youth Jubilee staged at the Tor Vergata before the Pope, Indro Montanelli wrote: "But this is really what I consider young people are unknowingly looking for and wanting in a world of the ephemeral in which we have caused them to be born, something that has no time because it is eternal and which offers them something stable on which to rest". And then went on to add: "I wonder whether this gathering, so orderly and calm, is not in fact a revolt, or at least a protest, against a way of life dominated by the anxiety of things new, which by evening has made decrepit what it invented in the morning".
Such considerations are very interesting. They take shape from an admittedly layman's point of view and grasp the fundamentals needs of human beings: the problem of their relationship with eternity, meaning with an Entity - because eternity is not something abstract - that beyond time, but within time, ensures the continuity of life.
The whole of life asks not to end, but it would be foolish to ask for it to last physically beyond the natural time granted to human beings, and all attempts made by science in that direction risk becoming an act of violence against human beings themselves.
The frailty of biological time cannot be overcome by artificially attributing to it a duration beyond time, but rather by investing the temporal dimension of life with a meaning beyond time. In this sense, the present, like the moment that has just passed, takes on a value that exceeds its chronological limits and everything that happens is not consumed, because it happens in the certainty that the totality of its effect is not reduced to a short dimension subject to calculations and measurements. The greatness of man - of the single individual - also grows on the intellectual plane, in proportion to the growth of his thirst for the infinite and eternity, and life, so as not to be considered an ephemeral episode, during which every act is destined to lose substance, asks for eternity, which is like saying that it asks for satisfaction. But an answer can only be obtained if the question is addressed to Someone who, in essence, embraces time and history, rising above time and history. Human beings have a crucial need of God, a God who is recognisable because He is incarnated and able to put them in the position to give eternal substance to their rational and affective experience and enable them to enjoy, at least partially, the possession of a life that does not die. How can human beings satisfy this aspiration? By untiringly repeating that request for the infinite and eternity which their freedom has enabled them to be able to make. Then the anxiety for things new is no longer an ephemeral and illusory sentiment and things new are not only the facade of something that is already decrepit when it is born. The desire for "things new" is legitimate because, if we thing about it, it coincides with the desire for eternity. What would life be if it did not ask to be renewed continuously? What would it be like, if human beings did not have the certainty that their time will not end with their death? What impulse on the other hand is produced when human beings are certain of entrusting to eternity every completed act - even what appears to be the most banal - and thus save it from dissolving in the quick passing of time.
Quite apart from the criticisms which, without being in full possession of the facts, are often directed towards it, the Meeting is a very free event and it is hardly possible not to acknowledge the fact that it is varied and hard to classify. We are aware that it is what it is because what fuels it is a breath of life much greater than the period of time during which it is staged.