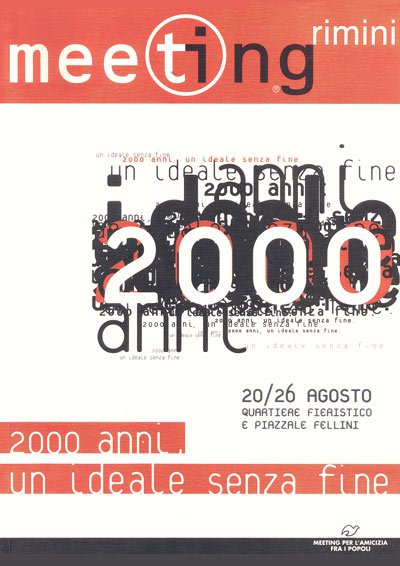 'Unlike the titles of past appointments, that of the next Meeting does not relate to meanings not explicitly expressed, nor does it centre on evocation. Its clarity is evident, as is its purposely simplified formulation. But the Meeting public, which besides being always more varied, has grown, and not only in terms of numbers, is not unprepared for things new. For some years now, its has shown itself increasingly capable of critical and selective judgement. The next Meeting will be staged in 2000. Twenty-one years ago, when the great Meeting for Friendship adventure began - on a much smaller scale than today, but driven by the same enthusiastic ideals - we were not concerned with, not did we imagine we should some day be celebrating the 3rd millennium. In fact we had not expected to cover so much ground during a period of over twenty years. Today we have entered the year 2000, exhibiting the credentials of a cultural commitment and with the certainty of having defended values that belong to a tradition that has revolutionised life. Because 2000 years are the proof of a deep-rooted historical revolution; no one can deny this, no one would dare say that the appearance of Christ in history has not changed its course, dividing it into two: before and after. But only a few can say that the Christian event has summarised everything. In this sense, that occurrence of 2000 years ago lasts into the present and transforms the past, because of its inextinguishable continuity. It is the source of an endless ideal that is incarnated and confirmed day after day in the concreteness of circumstances; an ideal that is not the pure sentimental projection of a value whose effects will be measured over an unlimited time.
The 1998 Meeting stated that life is not a dream. The next proclaims that life is sustained by an ideal; this is true for all human beings, but the greatness of man is proportionate to the greatness of the ideal that sustains him. If dreams weaken man because they project him into an illusory dimension, where he takes refuge in the absence of certainties, ideals, unlike dreams, were born from the certainty that 2000 years ago provided the only possible answer to the most profound needs of the heart. This answer becomes the very object of the ideal which is "ultimate desire of the heart". The task the Meeting has set itself is to enable all participants to experience what it means to feel free; free from prejudice, from scepticism, from vanity, from ideological models. To reach this goal together, we can rely on 2000 years of history and on a never-ending ideal.'