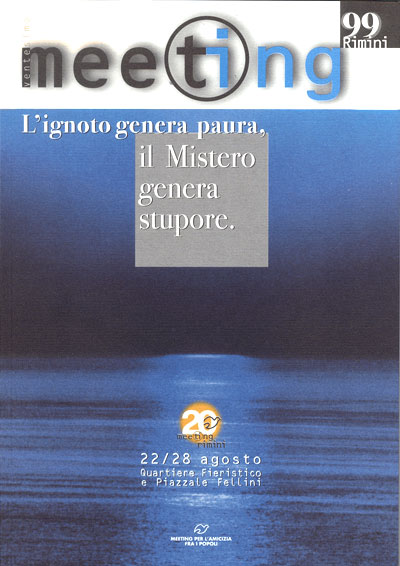 'The art form that best expresses 20th-century culture is the cinema and because the cinema, like all other art forms, is rapidly evolving, it tends to reflect the trends of the predominant culture. In order to appreciate the "climate" in which we live then, the best thing we can do is analyse a number of successful films. You may be asking yourselves what this short introduction has to do with the title of the forthcoming Meeting, an event now in its 20th year. The title itself is rather complicated, opposing as it does the unknown to Mystery, fear to wonder, where the word Mystery, let us not forget, has a capital M. This is not an unimportant detail, because the key to understanding the Meeting theme is contained in that Mystery which, in its concreteness, differs both from the unknown, though sharing with the latter certain characteristics, and from the sacred mystery of the pagans, a sort of volatile and impalpable spirit that all envelops, but which, in its elusive abstractness does not communicate with human beings. In just another year, the second millennium will have come to a close, and like all century ends, never mind millennium ends, we are witnessing the growth of irrational influences that, though without grounds for existence, are rewarded by the excitement of visions of a spiritualistic nature, to be considered as an attempt on the part of human beings to escape reality, to seek shelter in the dimension of the imaginary seen as an antidote to the reality of life. Also typical of certain periods is the appearance of certain superstitions, the erecting of idols, to which are attributed miraculous powers against fear generated by the void and the unknown. The cinema, like many other art expressions, celebrates the unknown, the absurd, the devilish, realising that reality is inhabited by princes of the air, from whom there is no escape; all one can do is acknowledge one’s powerlessness, or at most seize the fleeting moment of a short-lived pleasure. Thus the unknown produces that condition of consternation that even the powers-that-be find useful for their own ends. But for Christians, a similar monumental hoax does not represent a source of fear. A way out exists from codified anguish, in the acknowledgement that "the Mystery impending beyond the horizon of any step has broken the line of the occult and has penetrated into the lives of human beings", speaking to them in human terms, showing its good side. Thus the "relationship between human beings and their destinies will no longer be based on human effort, but will instead be an encounter with the present". Man is of course attracted by this Mystery, because he senses that it corresponds to the primary needs of his heart: justice, truth, beauty. Mystery with a capital M helps and inspires the freedom of human beings to probe it, to make it an experience, so that the original attraction is transformed into an existentially stronger conscience, full of clear-sighted ability to judge reality, of active, constructive and vital energy. These are the elements that characterise wonder. With wonder, human beings gradually come closer to Mystery, which slowly appears in the signs that point to it, the consistency of which human beings recognise because they are simply the very facts of life, flooded with new light. In the certainty that Mystery overcomes the unknown, every fear is defeated. A new culture is thus enforced, based on a certainty, not of numbers or puzzles, that defies time, the senseless fears of the end-of-millennium and gnostic deviations. That opens onto the great Mystery.'