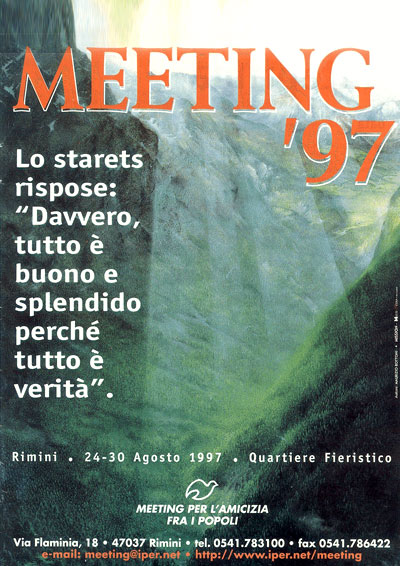 The starets replied: 'Truly, all is good and splendid because all is truth

'"Truly, all is good and splendid because all is truth". With these words, the starets Zosima, one of the most striking figures in Brothers Karamazov by F. Dostoyevsky, answers a young man met by chance and who was capable of imitating bird songs. The discussion between them centres on the praise of creation, of nature and all things, because the world is a sign of beauty and truth. By placing those word in Zosima's mouth, F. Dostoyevsky, supreme investigator of the human soul, and one of the few capable of achieving a universal outlook, reaches the point of emphasising the positiveness of reality, in the complete awareness that such a statement passes through the precise knowledge of sorrow. His positive outlook, his sense of beauty as "splendour of the truth", represent the aim of a road that runs through history which is far from level. And it is precisely against those who, around the 1860s, were intent on denying human values outright, against the Nihilistic movement, as portrayed by many of the characters in the writer's novels, especially in Devils, that Dostoyevsky launches his challenge and strikes up his song of hope. As a Christian, he translates the Pauline principle that "all creation is good", into the phrase pronounced by Zosima. Never has a statement been more provocative and counter - cultural with respect to today's dominant thought. In contrast with the ideologies of this modern age, which represent a hazy legacy of nineteenth-century nihilism because they are intent on erecting monuments to doubt, Dostoyevsky's message is extremely timely. But modern nihilism has been defined by a leading contemporary philosopher as "gay"; it is in fact much less tragic and much more futile and imperceptible than that of the Devils. With Zosima's words, the Rimini Meeting would like to reaffirm this year that reality is positive, as this great gathering demonstrates, presenting itself as an engaging experience not subject to prevailing scepticism.'