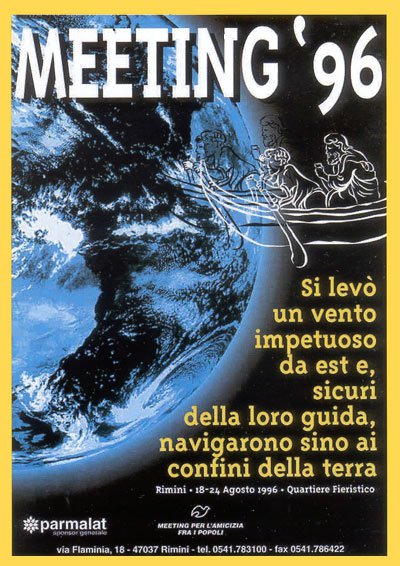 A raging wind blew up from the east and, confident in their guide, they navigated to the ends of the earth

'The Meeting title relates to some extent to the theme of the most significant event of this 17th encounter: the great exhibition 'From the land to the peoples", which opened on 31 March last. The Meeting theme is wrapped up in an evocative phrase, which in turn is freely based on a passage from the Acts of the Apostles narrating one of the most crucial moments in the pilgrimage of Paul in Europe - the beginning of the journey which took him to Rome. The Meeting - this great summer cultural event - enables us to embark on another journey, in no way imaginary, as far as the ends of the Earth - a borderland which human reason can still possess - starting from a particular area of the globe, the East, the chosen land of the people of Israel, and continuing "among the people' Travellers dri-ven by a thirst for knowledge, by a raging wind, which censors nothing, but examines all, in search of "that whi-ch is new" and worth knowing better. Behind this jour-ney is desire, for pagans unknowing, and for Christians founded on the certainty of a safe guide, of embracing the world in its entirety, of stopping at nothing - neither the objections nor the contrasts of different cultures - but of entering with them into a fertile dialogue; it has reason to exist only if it does not become confused with weak sur-render, with an inclination for compromise, with the be-trayal of one’s certainties, but is based on the ability to o-pen up one’s judgement to deformed realities, to find in these the continuous power of human accents The Meeting is a feast in which the organisers and spectators alike be-come involved with the same passionate spirit of partici-pation. And it is exactly this enhancing embrace, which the ancient Christians would have called "ecumenical”, and which moves, like a raging wind, that represents the global strength distinguishing the Meeting and all those who, in one way or another, help to make it possible.'