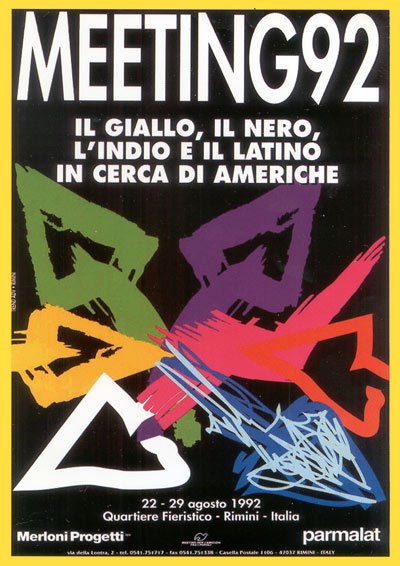 The yellow, the black, the amerindian and the latin search of americas

OTHER SEEK US ... BUT WHAT ARE WE SEEKING? 500 years have passed since the discovery of America. At that time, developed nations were intent on discovering a new world. Today, it is "the yellow, the black, the Amerindian and the latin in search of Americas". America is no longer only a particular geographical area, but a "global village" which at least coincides with the Western world. Especially after the Gulf War. We can safely say that we are all Americans, not only because we all drink Coca Cola, but because we drink a way of life, culture, politics and economy, 'the American way of life', as Joseph Cardinal Ratzinger recalled. And for the real gourmets, there is the "supermarket" of values and religions. Evervthing costs more or less the same. OUR HUMAN CONDITION Ours is the free world (at least that's how we saw ourselves when Communism was still a threat). But what happened? We saw freedom as independence and absence of ties and reduced it to loneliness, because the absence of ties means that little by little we become lonely, lonely in twos, lonely in threes. And the powers-that-be know that when people are lonely, it is easier to control their desires and interests. A person living in a flat in New York, or in Milan, thinks what he reads in the newspaper or sees on TV. Some freedom! A frightened society (frightened even of having children), as if the development of the Western world had not freed but imprisoned us. Frightened of ourselves and of others, we build walls and make laws to shelter behind. Is there still something to look for and discover beyond the wall of dreams? WHAT WE HAVE DISCOVERED We are not scared of living. Struck by our encounter with Him who reveals the destiny of man, Jesus Christ, we are involved in a particular story which sets us in motion and makes us curious about evervthing 'in this unsettled, convulsive and pitiless world, which is yet so worthy of being loved if God loved it to the point of becoming a man Himself". POST-SCRIPTUM The Meeting exists above all thanks to the free-giving of those who support it, thousands of people who make it possible each year (otherwise not one of the words we pronounce would live beyond the space of a second). It exists thanks to an enormous curiosity and a passion for mankind.