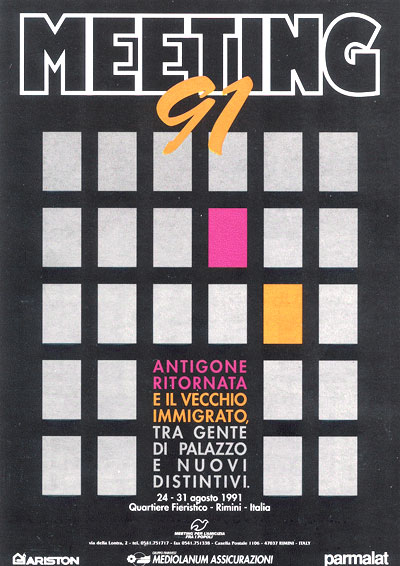 Antigone is back and the old immigrant, amid those in power and new badges

Returning to the story of Sophocle's heroine, the reader is brought to the edge of the precipice when Antigone discovers the desire for freedom deep in her heart is suffocated by the laws of Thebes. Reason and sentiment lacerate Antigone's heart and provoke a mortal struggle within her. Her cry, "who could I ask to fight for me?", finds no answer. Fate has condemned her. Greek wisdom at most suggests she shorten her suffering, but Antigone has an unquenchable thir-st for freedom. She admits she has broken the ru-les by mercifully covering her brother's body, yet she cannot reject the desires of the heart. The chorus of Sophocle's tragedy does not bring Antigone any announcement of freedom. On the contrary, it calls her desire for freedom arrogan-ce. To suffocate man's desire, by declaring it a socially unaccaeptable claim. is the first sign of Power's violence against life. The other violence is more subtle. It tries to pass for illogical what is merely reasonable. Reasonable is Antigone's love for her brother even though his pretension to go against the law might have seemed illogical. The violence of life has driven many human beings to suicide, a tempation which - albeit for a moment - all human beings can know. The return of Antigone to the Rimini Meeting is a representation of the query on the totality of man. Man's tragedy is wrapped up in that query, which is either imprisoned or free in his heart. While inside the Palace (society as it has organi-zed itself), many people think the world can be put straight, Antigone comes back and meets the old immigrant. Their encounter gives rise to a conversation that becomes a reinterpretation of events in human history after the death of Antigone. This old immigrant, who has had to leave a lot of things behind him in his travels, has certainly not for-saken the teachings of his father, the traditions of his people, the roots of his country. For him the saying stillholds good that "culture is what you remember when you forget everything else’’. By this encounter, Antigone, now back again, feels provoked and involved. The conversation goes on to include the figure of Christ. Those in power have asked Him "to take a seat', introducing Him as the great social assistant of humanity, but the old immigrant feels Him close by, with all His humanity, capable of conducting human beings of every age beyond their limits. The greatest provocation for Antigone does not come from those in power, with all the "new badges" they offer her. It is the old immigrant's invi-tation which fascinates Antigone. "So freedom is not a product of the modern age, it is part of man since the very beginning. The moment we were to stop asking ourselves about the sense of things, we should betray our freedom. Freedom is only possible if conscience interroga-tes with the spirit of He who is ready to see how others, i.e. Christ wants or can make us free" (cf. Litterae, n.2, 1991) Taken from "Litterae Communionis - CU June 1991. By kind permission of the publishers.