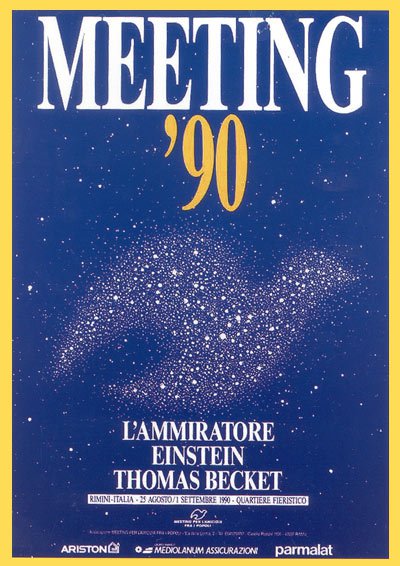 The figures making up the Meeting title represent different ways of approaching reality. Generally speaking, the three figures indicate a path. The first figure of Meeting '90 is the Admirer. To admire means to look at something with amazement, to consider something that is happening and that strikes us. What causes us to admire is the discovery of a correspondence; what provokes amazement in us, what fascinates us, is something we find correspondent to our desires. Reality corresponds in this way, in other words, reality is something made for us, which we feel to be ours. Admiration and amazement occur when we realise this correspondence. This has always been the prime motive of man. If admiration is provoked correspondence, i.e., by the acknowledgement of a relation, then admiration is also the prime moment, the condition of reason, because reason cannot exists unless sustained by the discovery of an order. No true reason exists except that born from admiration, by the discovery of correspondence. To reason means to be capable of facing reality, capable of grasping the initial order that exists in reality. Thus we come to Einstein. It was be who said: «Whosoever fails to recognise the unfathomable Mystery, cannot call himself a scientist», as if something greater and unattainable were forever revealing itself to the thoughts of man and to the efforts of the scientist. Einstein says that, in order that reason might develop to the full, revealing the order that exists in reality; we must inevitably admit that there is something absolutely beyond us. In this sense Einstein, the greatest scientist of the 20th century and perhaps the greatest of all time, he does not forget it. This is religiousness.. He does not eliminate reason, only the ultimate height of reson, because man attains religiousness through reason. The more, an reasons, the more he realises there is something greater than himself, something which dominates him: the Mystery.
If man fails to recognise the Mystery, then neither does he look for it, because he already knows all. Thus religiousness is at the same time a point of arrival for reason and a condition for its development. The maximum beight achieved by human reason is the immense joy of this correspondence, accompanied by the giddiness of not being able to possess it. Man needs to be helped, to be saved. Man needs the Grace of an encounter. This is what generates the possibility of the faith and introduces us to the third figure: Thomas Becket. To have faith means to have encountered the path, to have found that which leads to the discovery of the Mystery. Faith is accepting that there is a life, that the unfathomable Mystery spoken about by Einstein can be approached by means of a concrete path that has opened onto life. The Grace of this encounter can change the lives of each and every one of us, just as it changed the life of Becket. And one can give up one’s life to defend this encounter, because faith is the life of life, and life, without this encounter, is life no more.