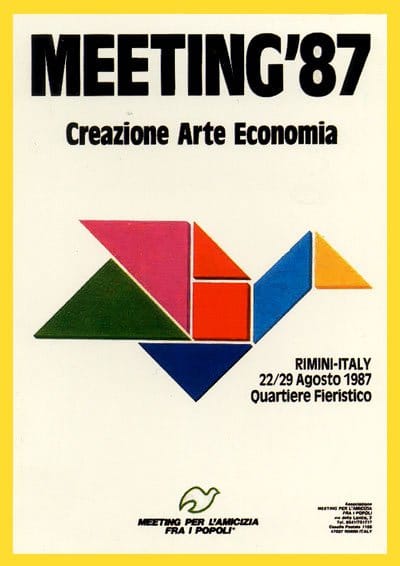 There is nothing strange in saying that Man has always created art, that he has always strived to build up economic activities and systems. But the bringing together of art and economy is all the more interesting if we consider that both these forms of human activity have a common origin: it is Man's desires in fact which push him beyond the limits of his own condition and cause him to come face to face with reality and to change it. Driven by this impetus, Man acts, works, creates. The desire which burns inside human beings in their relationship with reality is infinitely strong. In satisfying his every need, as in each single artistic gesture, Man employs every bit of energy at his disposal. Whether he is aware of it or not, every time a human being creates something, it is as if he were giving his work the shape of his relationship with reality as a whole. Usually this is quite obvious so far as art is concerned, rather more hidden in the case of economy, yet economic organization, as the governing and critical expression of human labour, cannot back down from this challenge of totality and human desires. History however, today as yesterday, knows two great enemies of the courageous adventure of human beings in the world: the narrowness into which every work and initiative tends to be confined, becoming the slave of its own particular form, and the power that cynically takes hold of Man's needs, curtailing his desires and programming his behaviour. Any hope that still lives on does so in those places and through those experiences capable of creating works in which Man's desires are realized and take shape without betraying the infinite horizons into which they were born. For it is only then that art becomes a great work from which Man constantly cries out his need for the infinite. Yet everything can be a work of creation as long as, during our period of work we never lose sight of, but rather constantly "regain" that totality from which creative works are born and for which they are made. Yet again the Church offers itself to humanity and to its need for the infinite, as a place where nothing belonging to Man and to mankind is forgotten.